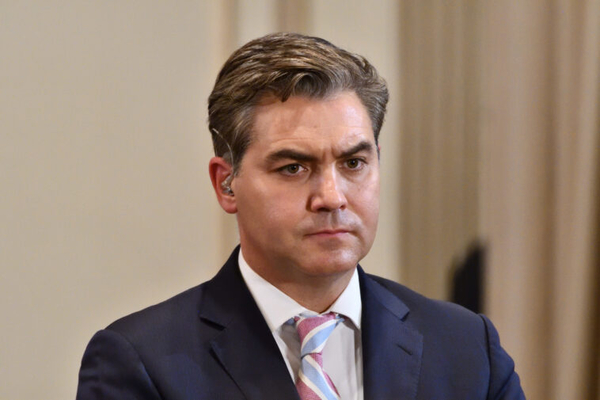 (trendingpolitics) – Following a mass shooting, those Democrats not busy demanding restrictions on the rights of ordinary Americans as a way of atoning for the sins of bloodthirsty criminals are often busy trying to smear and slander those on the right who proudly stand up for the right to keep and bear arms.

Such is what CNN host Jim Acosta was up to when he ridiculously and disgustingly smeared NRA board member Judge Phillip Journey as having “blood on his hands” because of the shooting in Uvalde, Texas.

Acosta, after reading from a New York Times article listing instances in which the shooter was able to obtain weapons legally, as appears to have been the case in Uvalde, said:

“For years your group has blocked new gun safety laws and pushed for the most relaxed rules on firearms. Isn’t some of this blood on the NRA’s hands?”

In other words, Acosta was saying that because the NRA stands up for and protects the clear, fundamental right to keep and bear arms, it’s responsible for some psycho going on a rampage as the police sit around and taze desperate parents.

Despite the smear, Judge Journey responded politely, thanking Acosta for having him on and then saying “I don’t believe the supposition of your question is accurate.” Should Biden Take a Cognitive Test to Remain in Office?*Yes!NoEmail*This poll gives you free access to our premium politics newsletter. Unsubscribe at any time.

Then, when he started “I think that it’s important to understand–” Acosta cut him off, repeating the smear in a more personal way and saying:

“No, no, no, sir — I hope you understand I’m going to have to cut you off when you start saying things that just aren’t true.

“The NRA has not worked to tighten rules. That’s just not the case. The NRA for years, for decades, has pushed for the most relaxed rules possible in this country, and that’s why we have mass shooting after mass shooting.

“Please if you could answer the question I asked you at the beginning of the interview, isn’t this blood on your hands?”

At that point, Journey fired back with a bit more grit, saying “I’m not the one that pulled the trigger and neither are the members of the National Rifle Association.”

Indeed. NRA members are generally law-abiding and far more safe and responsible with guns than the denizens of Democrat-controlled areas such as Chicago, where thugs in blue areas shoot each other routinely. Responsible gun owners of the sort who compose the NRA are a quite law-abiding bunch.

Further, as Journey then pointed out, the real problem in Buffalo and Uvalde was that the government authorities ignored warning sign after warning sign that the kid involved in the shooting was preparing to go on a shooting spree and should be treated as a threat. People did “see something” and “say something” but, predictably, the government did nothing to deal with the issue.

The two continued to bicker after that flare-up, arguing over why anyone would “need” an AR-15, when the real issue isn’t necessity but that it’s a right enshrined in the Bill of Rights.

Watch some of their discussion here: