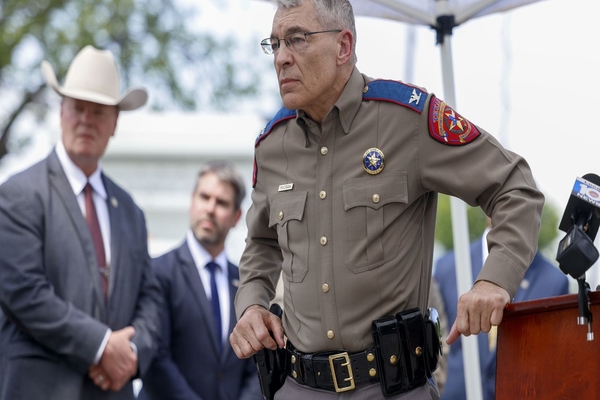 (breitbart) – On Tuesday, the Texas Department of Public Safety walked back earlier statements made by DPS Director Steve McCraw about how a shooter gained access to Robb Elementary School in Uvalde. Four days after McCraw said a female teacher had propped an exterior door allowing the gunman access to the building, a spokesperson says the agency has verified she did close the door – yet it failed to auto-lock as designed.

McCraw went on to say, “and certainly, the teacher that went back for her cell phone propped it open again. So that was an access point that the subject used.”

According to a report by the San Antonio Express–News late Tuesday, Don Flanary, an attorney for the teacher, explained his client removed a rock used to prop the exterior door while on a 911 emergency call and then closed the door before re-entering the building.

Flanary told the Express-News, “She saw the wreck; she ran back inside to get her phone to report the accident. She came back out while on the phone with 911. The men at the funeral home yelled, ‘He has a gun!’ She saw him jump the fence, and he had a gun, so she ran back inside.”

DPS spokesperson Travis Considine confirmed Flanary’s statement saying, “We did verify she closed the door; the door did not lock.” He added, “We know that much, and now investigators are looking into why it did not lock.”

The correction of critical information initially provided by DPS Director McCraw comes one week after the shooting. Since then, changes to critical assumptions made in the immediate aftermath has been a cause of consternation between state and local officials.

As reported by Breitbart Texas, Texas Lieutenant Governor Dan Patrick echoed Abbott’s statement about being misled, which was later refuted by Uvalde Mayor Don McClaughlin as “not true.”