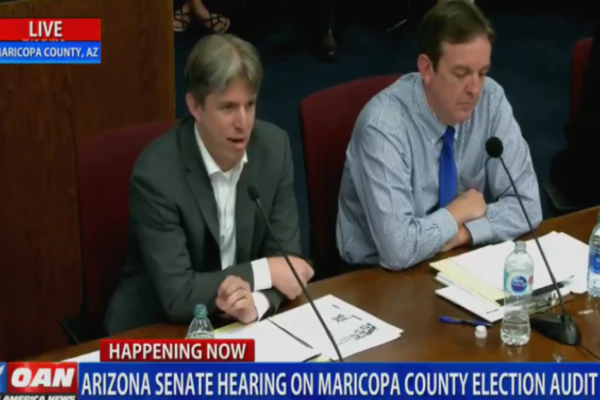 When reading these findings, keep in mind that Joe Biden was deemed to have beaten Donald Trump by only 10,457 votes in the state of Arizona.

74,243 mail-in ballots were discovered with “no clear record of them ever being sent.”

“[This] could be something where documentation wasn’t done right, there was a clerical issue, there’s not proper things there,” said Logan. “But I think when we’ve got 74,000, it merits knocking on the door and validating some of this information.”

Approximately 18,000 people voted in the 2020 presidential election and were removed from the rolls soon after.

“There could be a good, logical explanation for that,” said Logan. “But it seems like a large number to me to, after the election, be removed. And so getting more documentation […] seems logical, in addition [to] knocking on doors and canvassing can help validate that information.”

11,326 people voted in the 2020 presidential election who did not appear on the voter rolls on November 7 but then appeared on the rolls on December 4.

When Arizona state Sen. Karen Fann asked Logan for an explanation of this, he said he could not come up with one.

“It’d be a great thing to hear back from the county to see if there’s anything we’re not thinking of,” he added.

3,981 people voted in the 2020 presidential election despite registering after the October 15 deadline.

The hearing avoided overt accusations that Maricopa County officials intentionally engaged in election misdeeds and that Trump was the actual winner of Arizona in 2020. Nevertheless, it showed us that election integrity will be a significant issue for the foreseeable future.