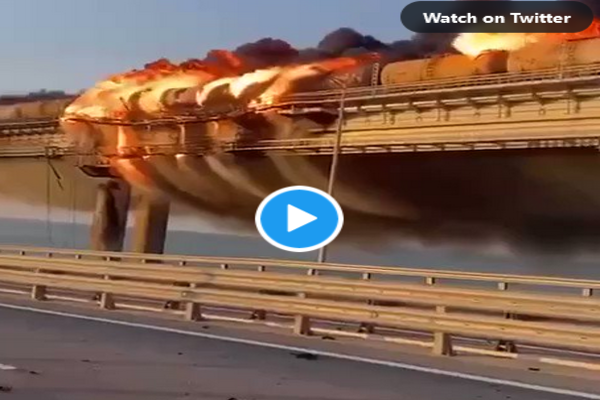 (breitbart) – Russian authorities claim the rail and road bridge linking Russia to the annexed Crimean peninsula is already partly open and the damage to it “insignificant”.

Vladimir Konstantinov, a key figure in Crimea’s Russian-backed regional government, blamed the damage on “Ukrainian vandals, who have finally managed to reach their bloody hands to the Crimean bridge,” according to the BBC.

He said that the crucial and symbolic piece of infrastructure, personally opened by Russian president Vladimir Putin, would be “promptly restored, since [the damage] is not of a serious nature”.

The Russians have revealed that at least three people were killed in the blast, however — passengers in a car engulfed by the conflagration. According to a statement by the Russian investigators, the victims were “passengers of a car that was near the truck that exploded” on the bridge, and the owner of the passenger vehicle was a resident of Russia’s Krasnodar region. Investigators said the bodies of at least two of the victims (that of a man and a woman) have been retrieved from the water and their identities were being confirmed.

While Ukraine has made no secret of its plans to strike the bridge, its official position on whether or not they are responsible for the explosion is, as of the time of publication, somewhat ambiguous.

Several senior figures have at least implied responsbility, however, with Mykhailo Podolyak, an adviser to President Volodymyr Zelensky, for example, tweeting: “Crimea, the bridge, the beginning. Everything illegal must be destroyed, everything stolen must be returned to Ukraine, everything occupied by Russia must be expelled.”

The Ukrainian defence ministry, meanwhile, tweeted: The guided missile cruiser Moskva and the Kerch Bridge – two notorious symbols of russian power in Ukrainian Crimea – have gone down. What’s next in line, russkies?”

Curiously, the BBC changed this statement in a report on the incident, misquoting the Ukrainians as having merely said “What’s next in line?” without the “russkies” pejorative.