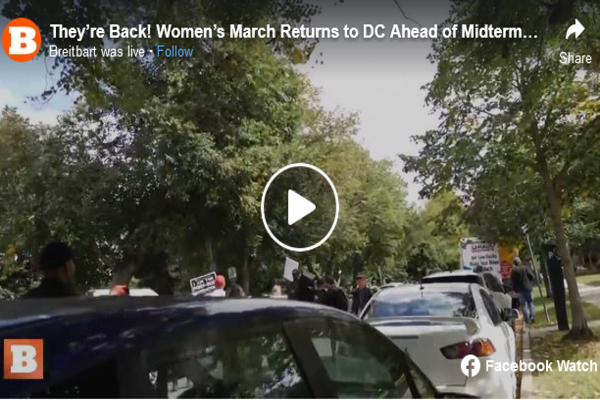 (breitbart) – This Saturday, thousands will march all over the country, including at the nation’s capital, as the Women’s March returns one month ahead of the midterm elections.

Participants are rallying for “reproductive rights” in the wake of the Supreme Court’s decision to overturn Roe v. Wade. Blue eye-liner is being encouraged — a symbol of what they believe will be the “blue wave” in November.

Breitbart News will be live-streaming the event in D.C., which is slated to begin with a noon rally at Folger Park, followed by a march to Union Square at 1:30 pm.

For those not in Washington, hundreds of other events are being held across the country:

Following the march, activists are planning simultaneous protests Saturday night outside the homes of “the 6 Christofascist” (conservative) Supreme Court Justices.

The first Women’s March in 2017 drew millions of protesters to D.C. following the election of President Donald Trump. Saturday’s organizers expect just 2,000 people to show up, according to a permit issued by the National Park Service, The Washington Post reported.