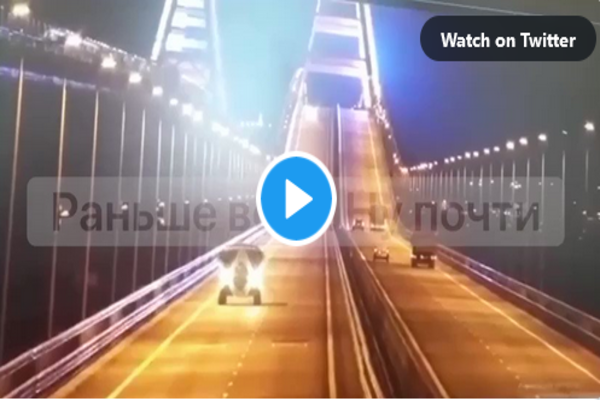 (breitbart) – The rail and road bridge from mainland Russia to the Crimean peninsula, annexed by Moscow in 2014, has been pictured in flames the morning after President Vladimir Putin’s 70th birthday.

The Crimean Bridge, also known as the Kerch or Kerch Strait Bridge, which stretches over more than eleven miles and cost hundreds of billion of rubles, has long been considered a signature piece of infrastructure, as the only physical link between Crimea and the Russian Federation prior to the general invasion of Ukraine in February of this year.

It has also long been considered a prime target for the Ukrainians, and while the cause of the damage to it is unknown as of the time of publication it is likely to be a source of great embarrassment for the Kremlin.

Pictures and video of the damaged section of the bridge show the rail portion engulfed in towering flames, and a section of the road portion collapsed into the sea.

“According to preliminary information, a fuel storage tank is on fire… Navigable arches were not damaged. It is too early to speak about causes and consequences. Work to extinguish the blaze is under way,” commented Oleg Kryuchkov, described as an aide to Russia’s head of Crimea by Russian News Agency TASS.

Russia’s National Anti-Terrorism Committee has attributed the incident to a truck having “blown up”, according to RIA Novosti, which like TASS is owned by the Russian state.

Ukraine’s official position on the incident is currently ambiguous, although the country’s air force did post footage of the destruction on Telegram with the caption: “Morning on the Crimean bridge. Fuel tanks are on fire. Part of the roadway was also destroyed! Everything will be Ukraine!”