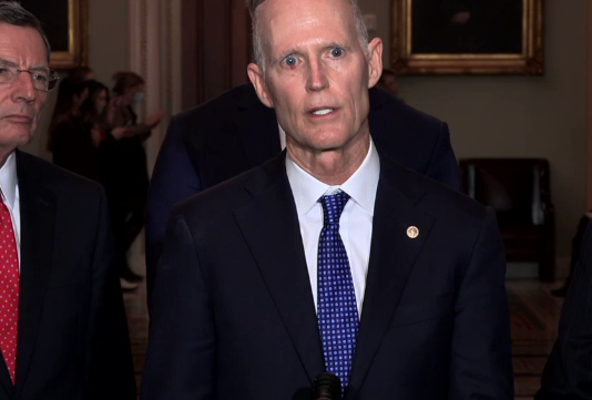 In a scathing letter on the subject to NRSC donors issued Thursday, Scott said it was “predictable” for the “vultures in the left-wing media” to roam “about trying to defeat” Republican candidates. “As always, they are being aided by the typical Washington ‘anonymous sources’ whose cowardice is only exceeded by their ignorance. … [A]ny so-called Republican who aids and abets the enemy is in fact trying to defeat Republican candidates and is a traitor to our cause. But these small people will not win.”

Scott’s strong words refer to the establishment wing of the GOP working with the media to discredit and trash-talk MAGA Republican candidates campaigning in swing states, who McConnell may not favor.

“As is predictable for this time of year, the vultures in the left-wing news media — The Washington Post, NY Times, CNN and the like — are roaming about trying to divide and defeat Republicans. As always, they are being aided by the typical Washington ‘anonymous sources’ whose cowardice is only exceeded by their ignorance,” Scott continued.

On Thursday, Senate GOP leader Mitch McConnell (R-KY) spoke to the establishment media and hinted that Scott should fund the NRSC with personal money. It should be noted that McConnell’s net worth was estimated in 2018 to be $34,137,534. It is an “interesting idea” for Scott to fund the NRSC with his personal funds, McConnell told Punchbowl News.”

Scott’s letter included a defense of his financial strategy to defeat the Democrats in November, despite the Republican establishment uniparty’s attempt to undermine the effort. Scott stated his committee dispensed $45 million dollars before Labor Day to prevent candidates from lagging in the polls and thus making it more difficult to raise money. He also revealed he disrupted the NRSC’s “monopoly control in digital fundraising,” perhaps potentially controlled by McConnell’s team, to create more competition among vendors and more positive outcomes from services rendered.

“In addition to providing our candidates with polling, data, assistance to win the Hispanic vote and many other services, the NRSC spent over $45 million dollars in advertising prior to Labor Day,” Scott said. “This is crucial to taking the majority, and it is working, with all our candidates in the hunt. None were left for dead, and every Democrat we are targeting is under 50 percent in polling today.”

“Outside groups that typically wait to significantly invest in races until after Labor Day seldom help these candidates when they are down in the polls. Many of our candidates finished bruising primaries with no money in the bank,” he continued. “The NRSC helped our candidates with early ads, and we’re proud that nearly every candidate ad that was on the air this summer had assistance from the NRSC. We will continue to do this through election day.”

Scott reiterated he is “unfazed by the Washington griping” and warned the establishment GOP “that this is not a game, it is a battle for the future of our country.”

“[D]oing things the same way will not get you a different result,” he said. “We need a different result this time — we need a Republican majority in the Senate and House or else we will continue to get more federal debt, trillion-dollar deficits, open borders, a woke military and rampant crime. Things must change. Thank you for all you do — please donate more if you can — on to victory!” he concluded.