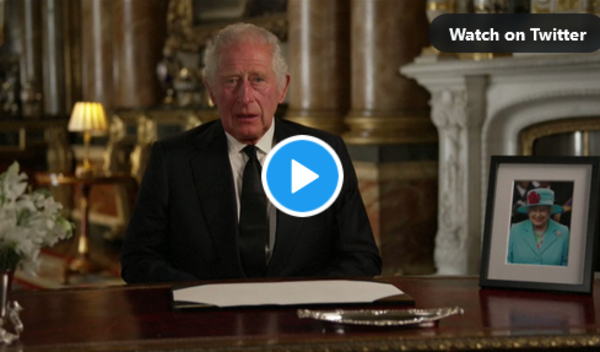 (breitbart) – King Charles III praised his late mother, Queen Elizabeth II, for a lifetime of service in his first address to the British people and Commonwealth, and offered a solemn pledge to serve loyally “throughout the remaining time God grants me”.

“I speak to you today with feelings of profound sorrow,” began the 73-year-old monarch, who has had to take up his mother’s public duties with little time for personal grief and reflection.

“Throughout her life, Her Majesty the Queen – my beloved mother – was an inspiration and example to me and to all my family, and we owe her the most heartfelt debt any family can owe to their mother; for her love, affection, guidance, understanding, and example,” he continued.

“Queen Elizabeth’s was a life well lived; a promise with destiny kept and she is mourned most deeply in her passing. That promise of lifelong service I renew to you all today,” the King vowed.

“In 1947, on her 21st birthday, she pledged in a broadcast from Cape Town to the Commonwealth to devote her life, whether it be short or long, to the service of her peoples. That was more than a promise: it was a profound personal commitment which defined her whole life. She made sacrifices for duty,” he recalled.

“Her dedication and devotion as Sovereign never wavered, through times of change and progress, through times of joy and celebration, and through times of sadness and loss. In her life of service we saw that abiding love of tradition, together with that fearless embrace of progress, which make us great as Nations. The affection, admiration and respect she inspired became the hallmark of her reign,” he said, praising his late mother’s “warmth, humour and an unerring ability always to see the best in people.”

King Charles also spoke of “the Sovereign’s particular relationship and responsibility towards the Church of England” — and said that it was this church “in which my own faith is so deeply rooted.”

“In that faith, and the values it inspires, I have been brought up to cherish a sense of duty to others, and to hold in the greatest respect the precious traditions, freedoms and responsibilities of our unique history and our system of parliamentary government,” he explained.

“As the Queen herself did with such unswerving devotion, I too now solemnly pledge myself, throughout the remaining time God grants me, to uphold the Constitutional principles at the heart of our nation. And wherever you may live in the United Kingdom, or in the Realms and territories across the world, and whatever may be your background or beliefs, I shall endeavour to serve you with loyalty, respect, and love, as I have throughout my life,” he pledged.

King Charles spoke warmly of his Queen Consort, Camilla, of his eldest son William, the new Prince of Wales, and even of his “love for Harry and Meghan as they continue to build their lives overseas.”

“In a little over a week’s time we will come together as a nation, as a Commonwealth and indeed a global community, to lay my beloved mother to rest. In our sorrow, let us remember and draw strength from the light of her example,” the King said.

“On behalf of all my family, I can only offer the most sincere and heartfelt thanks for your condolences and support. They mean more to me than I can ever possibly express.

“And to my darling Mama, as you begin your last great journey to join my dear late Papa, I want simply to say this: thank you. Thank you for your love and devotion to our family and to the family of nations you have served so diligently all these years,” he concluded.

“May ‘flights of Angels sing thee to thy rest’.”