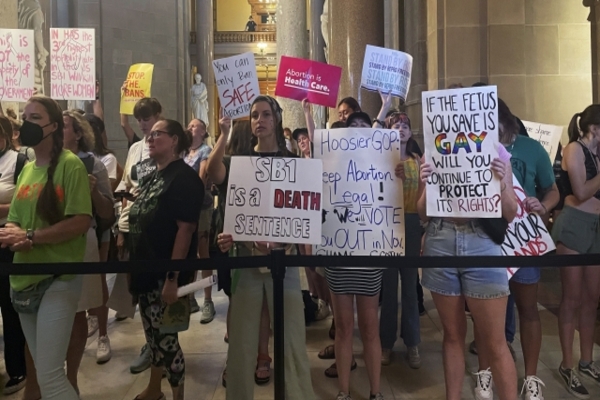 Gov. Eric Holcomb (R) signed Senate Enrolled Act 1 within the hour after both Republican controlled-state chambers passed the bill during a special session on Friday.

The bill passed in the House, 62-38, in the afternoon and later in the Senate, 28-19. No Democrats voted in favor of the legislation, with some Republicans joining them.

If an abortion is to be performed under one of those exceptions, it is only permitted to take place in a hospital or a facility owned by a hospital, the Associated Press (AP) reported. This means that all abortion clinics will lose their license, the news agency noted.

If a doctor performs an illegal abortion or does not properly file the required reports, they risk losing their medical license.

The legislation will take effect on September 15.

Indiana’s current abortion law allows the procedure to take place for up to 22 weeks after the mother’s last menstrual cycle, CNN noted.

“Following the overturning of Roe, I stated clearly that I would be willing to support legislation that made progress in protecting life,” Holcomb said in a statement after the passing of the legislation. “I am personally most proud of each Hoosier who came forward to courageously share their views in a debate that is unlikely to cease any time soon.”

After the bill passed the House, State Rep. Wendy McNamara (R), a sponsor of Senate Enrolled Act 1, said that the legislation “makes Indiana one of the most pro-life states in the nation.”

The White House released a statement Saturday, criticizing the legislation as “another radical step by Republican legislators to take away women’s reproductive rights and freedom.”

While many states had trigger laws that went into effect following the Supreme Court’s late June ruling in Dobbs v. Jackson Women’s Health Organization, Indiana did not have a trigger law in place and became the first state to pass legislation restricting abortion.

The bill follows after the West Virginia legislature failed to pass an abortion ban last week and Kansas voters overwhelmingly rejected a provision to take abortion protections out of the state’s constitution on Tuesday.