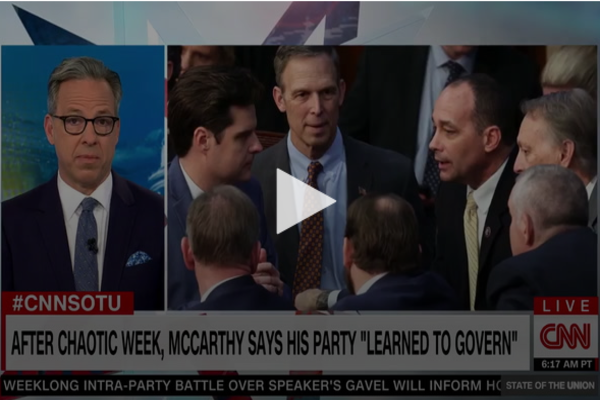 (breitbart) – Representative Dan Crenshaw (R-TX) said Sunday on CNN’s “State of the Union” that he apologizes for calling his fellow Republicans “terrorists” during the intense negotiations over Kevin McCarthy’s speakership.

During a Fox News Radio interview, Crenshaw said, “Those of us who are standing against this, we’re standing for principle. They are standing for notoriety. They’re standing for that extra news that because nobody ever cares about them, and they’re frustrated by that, and they want that extra news that we know that we can’t give in to this because then they will always run the conference, and they’ll just get another scalp and another scalp, whether it’s whether it’s Boehner or Paul Ryan or them McCarthy. Scalise would just be next, and we all know it. We just can’t allow that to happen. That’s why those of us are saying like, look, you pushed us into this corner. So now we’re now we’re saying we won’t vote for anyone but McCarthy. That’s why we’re saying it because we cannot let the terrorists win. That’s basically what’s happening. And I do have to go.”

Crenshaw said, “You opened up with the terrorist comments. I have to address that.”

Crenshaw said, “Things get heated, and things get said. Obviously, to the people who took offense by that, it’s pretty obvious it’s meant as a turn of phrase.”

Crenshaw said, “It in the context of intransigent negotiations.”

Crenshaw continued, “I’ve got thick skin. I’m called awful, vile things by the very same wing of the party that I was fighting at that moment. So I was a little taken aback by the sensitivity of it. But to the extent that I have colleagues that were offended by it, I sincerely apologize to them. I don’t want them to think I actually believe they’re terrorists. It’s certainly a turn of phrase that you use in an intransigent negotiation.”