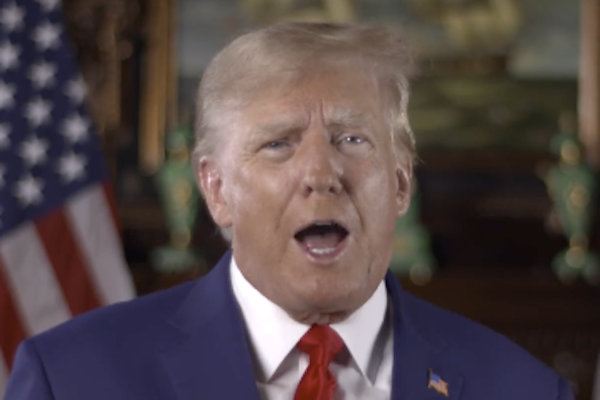 (trendingpolitics) – Donald Trump won’t be using the slogan “Keep America Great” for his 2024 presidential run, he revealed to a private audience at Mar-a-Lago.

Trump explained why in a video posted by Jack Posobiec on Instagram, which has been clipped and transcribed in part below. Watch:

“And I couldn’t use it, because I said, America’s not great right now. We’re laughed at all over the world. We have inflation that’s killing us and just killing everybody. We have all of these problems.”

“We have that horrible, horrible situation that took place in Afghanistan,” he added. “I mean, you take a look at that, nobody’s ever seen anything like it.”

Trump also at another point in the speech slammed Joe Biden for his feckless leadership over the Afghan withdrawal debacle, which he argued invited Putin’s invasion of Ukraine.

The former president praised the U.S. military and touched on the disatrous Afghan withdrawal.

“We have an incredible military,” he also said, before touting his administration’s record of waging war against the Taliban without incurring any military casualties.

Trump told the story of General Dean “Raisin” Cain who spearheaded a successful operation against the Taliban in less than a three-week window despite the Washington consensus that such a mission could not be done.

“I think it’s a great story,” he remarked. “Because it shows how strong our military — our real military is — not this fake group of fakers who don’t know what the hell they’re doing.”

The former president appeared to take a shot at Woke generals, who are presiding over a massive drop in military recruitment, oversaw the disastrous Afghanistan withdrawal and have participated in a dangerous proxy war over Ukraine.

Trump then discussed his victory against the partisan January 6 committee before remarking on the recent arrest of Ashley Babbitt’s mother.

“Last night we had a tremendous success,” he said. “This was going along at a very bad clip. We were being mocked and scorned by the Fake News Media, by the Democrats, I called them the Radical Left, I call them Marxists, I call them Communists.”

“You know, I don’t ever call them Socialists anymore, because as we talk about a lot, they skipped Socialism. That was a mere short stop on the subway train. That stop lasted for about two seconds. They’ve gone past Socialism.”

“We have a weaponized country right now with law enforcement — it’s a disgrace what’s happening to our country,” he went on.

“Ashley Babbitt’s mother was arrested yesterday,” he said. “Because she was protesting the death of her daughter being shot by a lunatic who has got a record of not-so-good. And then they try to protect him. And they do things — what they’ve done to that family.”

“But they shot her,” he added. “For no reason. And they arrested because the mother was in a group — they arrested yesterday the mother of Ashley Babbitt. So, she loses her daughter and then on top of it she gets arrested. And we are not going to let this go on.”

“We’re not going to let this go on,” he said. “These people are horrible, horrible people.”

“These are horrible people — and what they’ve done to protesters,” he continued. “These are protesters. They were protesting a dishonest election.”

Donald Trump then remarked about the developments in Georgia, such as the comments recently revealed to have been by Ruby Freeman.

The entire video is a must-watch. You can see it all here.