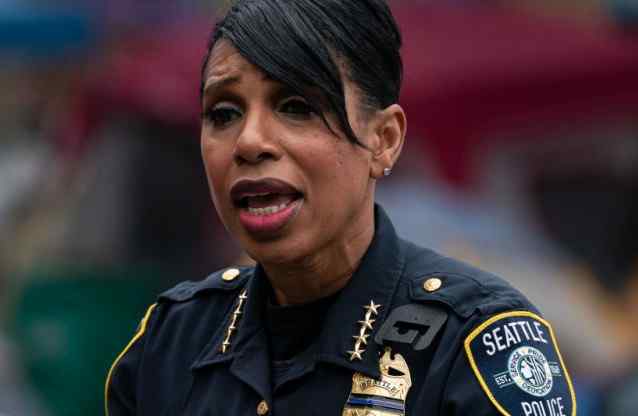 (Gateway Pundit) – Businesses and police precincts in Seattle boarded and barricaded their properties in preparation for expected violent Antifa and Black Lives Matters protests this weekend. The protective measures were taken as Seattle Police Chief Carmen Best sent a letter to Seattle businesses and residents that police, having been stripped by the City Council of standard non-lethal riot control tools, will not be able to defend property from rioters.

A bill unanimously passed last month by the City Council that goes into effect this weekend (after Mayor Durkan declined to veto it and a federal judge declined to stop it) bans police from the “ownership, purchase, rent, storage, or use of crowd control weapons” including “kinetic impact projectiles, chemical irritants, acoustic weapons, directed energy weapons, water cannons, disorientation devices, ultrasonic cannons, or any other device that is designed to be used on multiple individuals for crowd control and has the potential to cause pain or discomfort.”

.@SeattlePD West Precinct, also SPD HQ, has boarded up their windows and brought in cement barriers to keep “peaceful” protesters from vandalizing and breaking-in. pic.twitter.com/WhMgKhYcpz

.@SeattlePD East Precinct, the Precinct that Antifa and BLM protesters previously overtook to create CHAZ/CHOP, is boarded up and fenced off.

The Chief of Seattle police basically concedes if you or your property is attacked by the mob, you won’t get much assistance. It’s not her fault. pic.twitter.com/GspibGqfYD

SPD has confirmed with the City Attorney’s Office that the City Council ordinance banning the use of less lethal tools – including pepper spray – commonly used to disperse crowds that have turned violent, will go into effect this weekend as written.

I am sending this notification for the purpose of ensuring I have done my due diligence of informing Council of the foreseeable impact of this ordinance on upcoming events.

It is a fact that there are groups and individuals who are intent on destruction in our City. Yes, we also have seen weeks of peaceful demonstrations, but two recent events (Sunday, July 19th and Wednesday, July 22nd) have included wide-scale property destruction and attacks on officers, injuring more than a dozen, some significantly.

This weekend we know that several events are planned across the city that will foreseeably involve many of the same violent actors from recent days. There is no reason not to assume we will continue to experience property destruction, arson, looting, and attempts to injure additional officers throughout the weekend and beyond.

With this Council ordinance, we hear loudly and clearly that the use of these less-lethal tools by SPD officers to disperse crowds that have turned violent have been completely banned by City Council.

Under these circumstances, as created by Council, we cannot manage demonstrations as we have in the past. If I am not allowed to lawfully equip officers with the tools they have been trained to use to protect the community and themselves, it would be reckless to have them confront this level of violence under the current legal restrictions imposed by Council.

Some have asked why officers are not arresting those engaging in criminal behavior, as officers do every day, and as they have in recent protests. If it is safe to do so, and even when it places their lives in danger, our officers always directly address criminal behavior. They do this, however, when they know they have the tools shown to allow the safe use of their policing powers. This Council ordinance denies them access to these tools that have been an essential part of their court-approved tactics.

We have clear, court-mandated procedures for arresting individuals, grounded in the principles of deescalation. SPD’s de-escalation principles are premised on the expectation, consistent with policy and best practices, that officers have the full array of approved tools. In large crowds, there is no safe way for officers to effect arrests when their colleagues do not have the tools necessary to protect them.

As City Council’s legislation goes into effect, it will create even more dangerous circumstances for our officers to intervene using what they have left – riot shields and riot batons.

For these reasons, SPD will have an adjusted deployment in response to any demonstrations this weekend. The Council legislation gives officers no ability to safely intercede to preserve property in the midst of a large, violent crowd. Allowing this behavior deeply troubles me, but I am duty-bound to follow the Council legislation once it is in effect. If the Council is prepared to suggest a different response or interpretation of the legislation, I stand ready to receive it.

Additionally, while the Ordinance by title suggests a limitation to crowd management purposes, the language of the Ordinance, in its blanket prohibition on the procurement and ownership of such tools, effectively eliminates these tools as available less-lethal options across the board. The bill clearly bans OC spray at any rally, demonstration or other event, despite if it turns violent.

Further, while we recognize a limited exception for the targeted use of OC spray, the exception does not realistically allow for deployment in such a manner that ensures the aerosol does not disperse onto anyone other than the intended subject. For these reasons, officers who typically deploy with OC as one of their standard less-lethal options will no longer be carrying this tool.

We continue to assess the impact of the prohibition on the procurement, ownership, and use of these tools on SWAT operations.

I believe Council can lead on de-escalation at each of these events through their voice and presence encouraging peaceful demonstrations. It remains my deep hope that once OPA and the OIG have had the opportunity to complete the analysis tasked to them, Council will engage productively with SPD and its accountability partners to forge a meaningful path forward that provides for public safety in these unprecedented times.