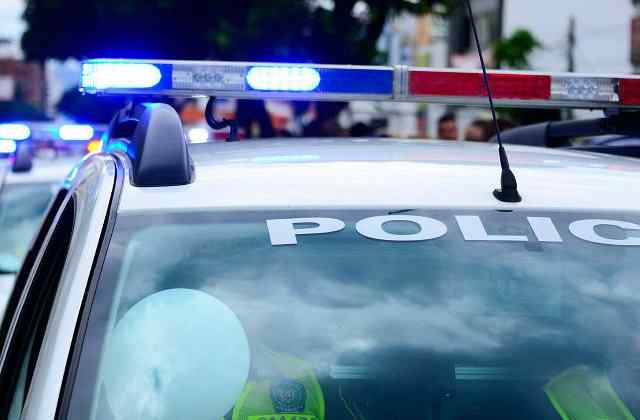 (Infowars) – I’m disgusted. I’m embarrassed. My heart is broken for the America that we’ve lost.

This morning, I woke up at 3am. I proudly announced on Fox and Friends First that Law Enforcement Today was proudly joining a number of other groups in taking part in the largest Back the Blue event in America.

Acclaimed keynote speaker Paul Butler and I were going to be the joint Masters of Ceremonies. We had rock and roll legend Ted Nugent flying in for the National Anthem – accompanied by Congressman Clay Higgins, the keynote speaker.

The first wave in the attack came from Facebook. After 6300 people RSVP’d to the event, the page was taken down by the social media giant.

It didn’t come as a surprise. I’m the same guy that just got a lifetime ban from LinkedIn last month for sharing an article about a guy who tried to kill two cops. We are sort of use to it.

But what happened today? Today it became evident just how legitimate the war on law enforcement is.

Congressman Clay Higgins and Ted Nugent are not allowed to attend the event… and that apparently comes directly from Governor Cuomo’s office.

Within hours of announcing that they’d be at the rally, Democrats throughout New York demanded the event be shut down. It was the typical liberal playbook – everyone that doesn’t tow the line is a racist, sexist, xenophobe, Islamaphobe, etc.

That didn’t work. Because the last we checked, it’s America. We have yet to see anyone shut down Al Sharpton from speaking at an event, or the self-proclaimed Marxists affiliated with Black Lives Matter.

So they tried a new approach. The state police detail ensuring the security of Congressman Higgins and Ted Nugent were told they weren’t allowed to offer protection.

So we came up with a new plan. We had dozens of Blue Knights who were going to provide safe passage.

And that’s when the governor apparently pulled the ultimate “trump” card. He instructed the health department to ensure that upon landing in the state, Congressman Higgins and Ted Nugent would either be turned around and sent back… or forced into a mandatory 14 day quarantine.

On Friday night, in a desperate attempt to save face, she blamed the pandemic.

She went on to suggest it was about safety – despite precautions taken by event organizers to ensure proper social distancing.

“Nassau county will continue to protect our residents’ right to safe, peaceful protest as is guaranteed under the First Amendment of our Constitution. However, we won’t tolerate blatant violations of the Governor’s quarantine order for travelers from high-risk states.”

Funny – we have yet to see any enforcement of said orders at riots or Black Lives Matter protests.

In executing their move, the department essentially accomplished their ultimate goal of pitting pro-law groups against each other… when we should be fighting against those who seek to divide us.

Law Enforcement Today got in this fight and behind this rally – along with groups such as Brothers Before Others and Advocacy for LEOs – to show our love, support and appreciate for police officers. We will not be castrated by politicians looking to flex their muscles by destroying the heart and soul of law enforcement and supporters.

Accordingly, our organization – and many others – are stepping back from the event and will instead be doing our own live stream Saturday.

To our brothers and sisters who still choose to attend the event (safely and social-distanced), we support you. We love you. We cherish you. And this is how we honor you… by fighting for you.

LONG ISLAND, NY – It’s one of the most painful decisions this group of men and women has ever made. And it’s also one of the most important ones. A war has been launched on law enforcement and their supporters – and it’s from none other than New York politicians. And today… we declare “enough is enough”.

It’s all because an event that was quickly turning into America’s largest Back The Blue rally became too popular.

We expected counter-protestors. We anticipated police-haters. What we never saw coming was the very politicians who took an oath to protect the Constitution leading the charge to directly target law enforcement and supporters through dirty politics.

On Friday, Governor Cuomo’s administration, after hearing in the national media that rock and roll artist Ted Nugent and Congressman Clay Higgins would be attending the event, formulated an underhanded strategy to directly target them.

When the administration realized that Congressman Higgins, Ted Nugent and the biggest supporters of the event weren’t backing down… the health department was instructed to make sure that Higgins and Nugent weren’t allowed to step off of the plane and attend the event under the guise of “COVID-19 restrictions”.

Of course we all know what that really means – especially given the extensive safety measures that were taken to ensure proper social distancing, mask usage and sanitizing precautions.

This came directly after the state troopers who were going to provide a private security detail from the airport for the congressman were told they’d be suspended and investigated if they offered protection – even if they did it on their off-time.

In a show of solidarity with those who volunteered to attend the event on their own dime, and the law enforcement officers who put their lives on the line every single day, the largest police-groups associated with the event have decided they could not, in good conscience, still take part in the event.

“When politicians create controversy and weaponize national pandemics, they themselves become the counter-protestors,” said Rob O’Donnell, former NYPD Detective and Board Member of BBO.

Brothers Before Others, Advocacy for LEO’s and Law Enforcement Today (the largest police-owned media company in America) will no longer be attending the event and will instead be hosting a private social media event that cannot be stopped or censored by New York politicians.

It’s an opportunity for patriotic Americans from across the country who support law enforcement to take part and to declare “enough is enough”.

“This is bigger than one person…one speaker… one congressman,” said Law Enforcement Today’s National Spokesman Kyle Reyes, who was set to be one of the Masters of Ceremonies for the event.

“This is about a nationwide statement that the attacks on our law enforcement and supporters cannot – and will not – be allowed to continue on our watch without repercussions.”

“EVIL TRIUMPHS WHEN GOOD MEN DO NOTHING.”

We have reached a tipping point in society. Let’s call it what it is – there is a full-blown war on law enforcement.

There are rising calls to defund the police…abolish the police… kill the police. And we’ve all been sitting here silently, trying to figure out what happened… and how it happened so quickly.

Officers signed up to serve and protect. They didn’t sign up to be attacked day after day. And it’s not just the criminals who are attacking them – it’s mayors who are handcuffing them and targeting them for doing their jobs.

There are approximately 850,000 sworn law enforcement officers in America who right now feel alone and under full-scale assault.

Ted Bell is an officer who was wounded in the line of duty. In a recent interview with Law Enforcement Today, he said that the sweetest sound he ever heard was sirens, because he knew “all of my brothers and sisters were coming for me”.

It’s time for law enforcement officers who are under attack to get some backup – and that backup is all of us.

Let’s do some math.

There are approximately 331 million Americans.

According to a Gallup poll, 85% of Americans support law enforcement.

That’s 16 and a half MILLION people.

At the height of World War 2, the size of the United States military was approximately 12 million Americans. Our nation became back to back World War Champions… with an army that was 12 million strong. It’s time for us to get back to our roots and build that army of support.

HOW WE’RE FIGHTING BACK

We’ve hired dozens of new writers at Law Enforcement Today. Most of them are active, retired or wounded police officers or family members. Their sole job is to bring you the stories of what’s really happening in America.

And we’re putting a team of cinematographers on the road to capture the stories of police officers and patriotic Americans. The stories that the mainstream media often refuses to show you.

Pick your gifts below. Sign up for a membership. Perhaps even just get a lawn sign for your house to show your support.

The proceeds will go into expanding our staff of police officers, their families and cinematographers to bring you those untold stories.

We’re also going to start listing all of the Back the Blue Rallies across America for you to attend.

Stop being the silent majority – and be a part of the army that will help save America. You are not alone… but right now, our officers are.

Backup has arrived – and this time, it’s all of us.