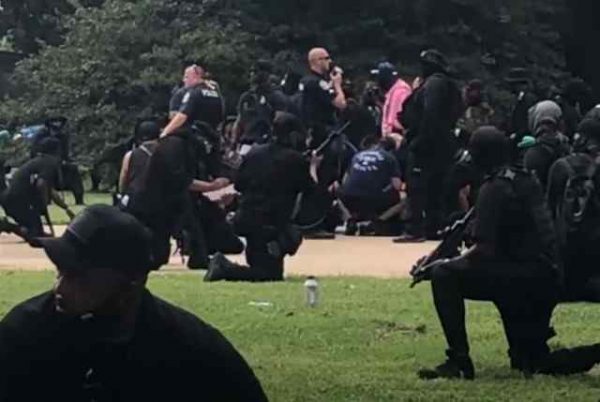 (Big League Politics) – A member of the “Not F****** Around Coalition” Black Nationalist militia accidentally shot three other militia members during the group’s armed protest event in Louisville, Kentucky on Saturday morning.

The moment of the negligent discharge was caught on camera, although the shot in question wasn’t captured. Members of the militia, who were in Louisville protesting the shooting death of Breonna Taylor, kneeled after the shot was fired. All indications point to one of their own shooting not just one, but three members of the group in a negligent discharge, raising serious questions about the NFAC’s ability to protest safely while carrying firearms.

BREAKING: We just watched two people be taken onto stretchers at Baxter square on 12th and Jefferson. Metro safe has confirmed reports of shootings & that there are multiple victims. We heard the noises when people scattered to get behind cars, & to take a knee @WHAS11 #nightteam pic.twitter.com/h5AsPWlLbi

Here’s the moment it appears an #NFAC member negligently shot himself, or another member. Those are initial reports from streamers on the ground. pic.twitter.com/06w8znZSpQ

Three people were treated by first responders at the scene, and were evacuated to an area hospital. A gun was confiscated by law enforcement for their investigation into the shooting.

A member of the NFAC, a self-titled black nationalist militia, reportedly chalked off the incident as a “little accident, it happens,” when speaking to the militia.

Their response to their mishap…”
One of the members of the NFAC spoke to throngs of protesters and said “we had a little accident, it happens,” the reporter said.” Yeah…lol better leave the tough stuff for grownups

So apparently members of the all-black "Not F*cking Around Coalition" militia were well, f*cking around, and accidentally shot each other… https://t.co/CYuzaYBxYw

The leader of the NFAC, who calls himself “Grand Master Jay,” has previously referred to members of his group as ‘expert shooters,’ a description that seems questionable after Saturday’s tragic incidence of a negligent discharge wounding three people. Grand Master Jay has advocated for black secession from the United States, proposing that the Union cede a state such as Texas in order to create a “new black nation.”

Reports indicate that the three wounded NFAC members are in serious, but not life-threatening condition at a Kentucky hospital.

These guys should probably calm down and reassess their worldview after three of their own were shot by a careless member of the group.