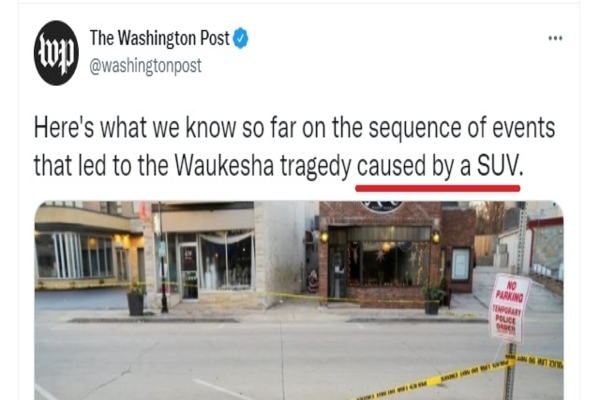 (IL) – The “Waukesha tragedy” was “caused by a SUV,” according to the Washington Post.

“Here’s what we know so far on the sequence of events that led to the Waukesha tragedy caused by a SUV,” the Post said in a tweet on Wednesday night.

The article itself pushes the whole “fleeing a knife fight” theory citing one officer “reporting he had heard of a possible knife fight,” completely leaves out that police said they were not chasing Darrell Edward Brooks Jr before he crashed through the barriers and waits five paragraphs before naming the accused.

What “we” know, they would have you believe, is essentially nothing.

From The Washington Post, “How the events unfolded at Waukesha parade”:

It was 4:35 p.m. in Waukesha, Wis., 34 days before Dec. 25. But the neighbors of this city west of Milwaukee were celebrating a Christmas parade moving through Main Street.

At the same time a few blocks away, an officer reported he had heard of a possible knife fight near the boat launch in Frame Park, according police audio and time codes provided by the website Broadcastify. Police arrived to the park minutes later but did not immediately find the fight. At 4:37 p.m., the officer clarified to say that the fight was by the rental business near the Rotary Building. It was not clear from the police audio if or when officers approached the second location.

A quarter-mile from the rotary building, at 4:39 p.m., an officer told a dispatcher a maroon Ford Escape “just blew by [him]” at White Rock and Hartwell avenues, the intersection where barricades blocking traffic to the parade were removed just a minute before, according to police audio and time codes provided by Broadcastify.

A few moments later, the SUV rammed through the parade participants, killing five and injuring more than 40 people, including children.

They said nothing about Brooks’ violent anti-white views, black supremacist postings on social media or the fact he described himself as a “terrorist” in one of his own music videos.

For contrast, this is how the Post covered Charlottesville one day after the event:

Whereas the “Waukesha tragedy” was “caused by a SUV,” a “Nazi sympathizer” named “James Alex Fields Jr.” who “espoused extremist ideals” and “stood with a group of white supremacists” in Charlottesville “plowed” his car into a “crowd” of “protesters” in a “bloody crash.”

Contrasting the media’s coverage of Charlottesville where only one person died and Waukesha where 6 have died and multiple more may soon follow is like night and day.

One was the worst terrorist attack in the history of the country and the other was a sentient SUV getting into an “accident.”

UPDATE: They deleted the tweet on Thursday citing “language that was changed after publish.”

The new tweet says, “What we know so far on the sequence of events that led to the Waukesha tragedy.”