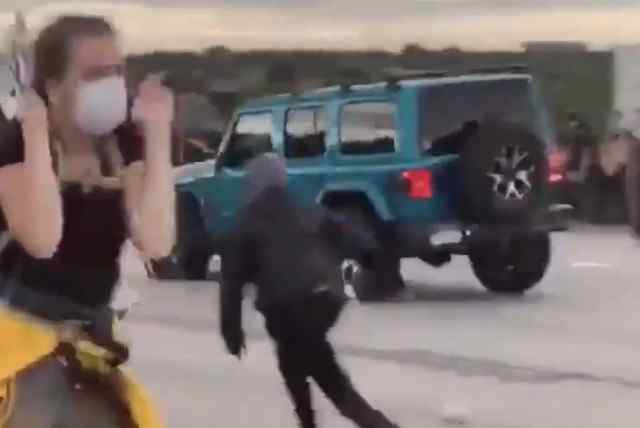 (Gateway Pundit) – A car drove through a crowd of protesters that were walking on I-225 in Aurora, Colorado, and a protester shot other protesters while trying to shoot the driver.

At least two protesters were hit or grazed by bullets as a fellow “protester” tried to shoot the driver. There were multiple gunshots on the car, but the people inside did not appear to be injured.

Here's a video of a vehicle that was shot at by rioters in Aurora, CO today.

A couple notes: the jeep was driving down an open lane, it seems to have a flat tire from rioters damaging it previously, the rioters begin shooting at it after it passes them by without hitting anyone pic.twitter.com/wPWzFYIuqE

“While the protestors were walking on I-225, a vehicle decided to drive through the crowd. A protestor decided to fire off a weapon, striking at least 1 other protestor. They were transported to the hospital in stable condition,” the Aurora Police Department tweeted.

So this shooting just happened at BLM riot in Aurora. There was a car with a family in it, they approach the car with a rifle…The car speeds off. They almost executed a family just like they executed the teenagers in the Seattle chop. #aurora #protests #antifa #BLM pic.twitter.com/lEBCyKlWAt

In a follow up, the department wrote that “Someone else showed up to the hospital with a graze wound. The vehicle was towed and we are investigating that incident.”

Nationalist Review founder Brett MacDonald noted that, ironically, “shooting at a vehicle that has already driven by is what two St. Louis area cops were charged for. These rioters better receive the same treatment.”

Shooting at a vehicle that has already driven by is what two St. Louis area cops were charged for. These rioters better receive the same treatment.

(The cops shouldnt have been charged though.)

Videos of the car following the incident show at least one tire was popped, possibly by the mob. It is unclear if they hit anyone.

These guys may or may not have hit someone but they definitely didn't stop after. pic.twitter.com/2UYS5TovcG

A member of a black militia that marched in Louisville earlier in the day also shot himself and one of his peers by accident.