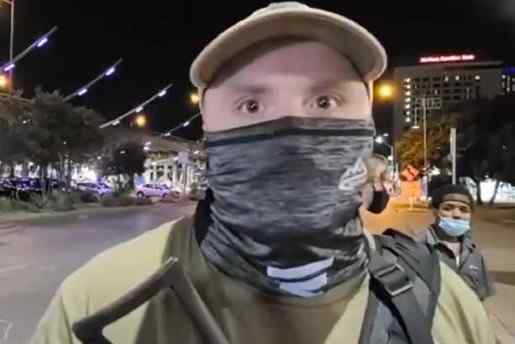 (Gateway Pundit) – Garrett Foster, the Black Lives Matter protester fatally shot by a motorist in Austin on Saturday night, said on camera that the “people who hate us” are “too big of p-ssies to actually do anything about it” when asked why he was carrying a rifle.

The Austin Police said during a late night press conference that Foster was carrying a rifle and may have approached the vehicle prior to the shooting. The shooter was detained and is cooperating with police.

“One adult male victim was located with a gunshot wound,” the press officer said, before confirming he passed away at the hospital shortly after. “Initial reports indicate that the victim may have been carrying a rifle and approached the suspect vehicle. Suspect was in the vehicle and shot at the victim. Suspect was detained and is cooperating with officers.”

he is on camera talking about using it on cops sweety pic.twitter.com/ei96xYHBgy

In an interview with a livestreamer, Foster was asked about what he was carrying, to which he responded that it was an “AK-47.”

“They don’t let us march in the streets anymore, so I got to practice some of our rights,” he responded.

The interview then asked if he felt like he would need to use it.

“Nah,” he responded. “I mean, if I use it against the cops I’m dead. I think all the people that hate us and want to say shit to us are too big of p-ssies to stop and actually do anything about it.”

When asked why he started carrying, he said that it was because his roommate got arrested and “they wouldn’t let us march anywhere.”

The incident was captured on Facebook Live. It appeared that the crowd was blocking traffic and possibly surrounding the car prior to the shooting.

“Someone got out of their car and shot one of the protesters,” the livestreamer said.

The man who was livestreaming, Hiram Gilberto, wrote in a follow up Facebook post that “I was no more ten feet from the shooter and running towards his car. It was TOO CLOSE. Currently on my way to give a witness statement to APD. KEEP THOSE AFFECTED IN YOUR THOUGHTS.”

Here’s the shooting, unfortunately I didn’t catch the actual shooting, but hopefully they can use it to identify some of these idiots! Sorry there isn’t sound as I had to record this with my phone off the computer, but when you see the big dude with the blackshirt walk behind the car he banged on the trunk, and that was my clue to get out. As soon as shots were fired I called 911 and before the dispatcher could say “you need police fire or EMS” I just said shots fired shots fired 4th and Congress” she then got as much info as she could, cops started screaming down the street and all hell broke loose. 10 minutes before this shooting I called and reported one of them (the protestors) had an assault rifle.As I was walking away from the earlier videos, I saw these officers standing there getting spit at and yelled at. I went to one of the officers that was away from the crowd, and told him that they were appreciated and not to listen to the nonsense that there were a lot of people that supported them, it’s just the small group that doesn’t that is the loudest! You could see the defeat in his face, he appreciated what I said, but you could just tell, these guys and gals are hurting! Austin was an amazing place, where even though we may disagree, we all respected each other, it was a safe, fun place to be. But the a$$ Austin Mayor Steve Adler has ruined this city. Crime is way up, it’s not safe anymore! for the first time in my life, i am ashamed to call myself an Austinite!

Witness explains what she saw: pic.twitter.com/DfkpqPTFk0