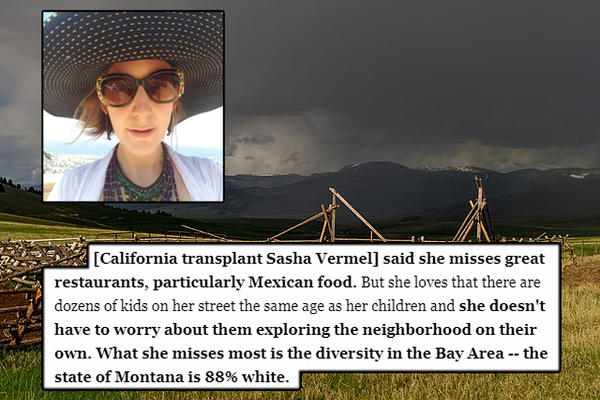 (IL) – Californians are fleeing the crime-infested third world s-hole they voted for and moving to Montana so they can repeat the process all over again.

From SF Gate, “Californians are arriving in Montana in droves. But they’re not welcome.”:

Even in 2019, Carolyne Calvin, a realtor with Keller Williams Montana Realty, said 85% of her buyers were from out of state. Just in 2021 so far, Calvin said the market in and around Bozeman has been so frantic, she’s sold at least 12 homes sight unseen. Those moving from places like Texas, Seattle and the Bay Area know how hot the housing market is, and they don’t have time to come into town every time they want to see a property. She said that while it’s good for business and those that want to sell their home, she feels badly for local buyers that are getting priced out of the immediate market and have to go out to outlying areas.

As with most moves, there are trade offs for those migrating from the Bay Area. [California transplant Sasha Vermel] said she misses great restaurants, particularly Mexican food. But she loves that there are dozens of kids on her street the same age as her children and she doesn’t have to worry about them exploring the neighborhood on their own. What she misses most is the diversity in the Bay Area — the state of Montana is 88% white.

Lance Trebesch, CEO of Eventgroove, said diversity seems like it’s actually gotten slightly better since he moved to Bozeman 17 years ago from the Bay Area, but he believes the city and state still have a long way to go. Hopefully, the growing tech community, coupled with an emerging remote workforce, should help.

“People have figured out what a great place this is,” he said. “The level of outdoor activities is top notch. There’s an emerging tech cluster. The schools are excellent…it’s not perfect, but why not live in a place like this?”

They have no desire to protect what makes Montana different from California and instead want to turn it into the s-hole they left.

California was heaven on earth and they ruined it!

It’s appropriate that leftism has now merged with imperialism and become the sole ideology of our ruling class.

These people are the embodiment of cultural imperialists.

What’s happened in Virginia over the past two decades is a perfect test case.

It was a conservative state. The GOP, operating under a failed conservative ideology, decided to make it “friendly for business” and let everyone in with open arms. Globalist megacorps came in, government money came in, libtards came in and immigrants looking to cash in followed.

The state has been so transformed demographically in just a few years that it’s now a libtard hellhole. Since taking over completely, libtards went to work *literally* tearing down the Virginian native people’s culture!

They won’t be satisfied until Virginia is a mirror image of San Francisco (another place they ran into the ground)! After it implodes, they’ll flee the state for New Hampshire or West Virginia and start the whole process over again!

This must not be allowed to stand!

The right must ditch the failed ideology of conservatism that has conserved nothing and recognize we need real leaders who are stronger than Trump that are willing to do whatever it takes to wash away this societal rot!