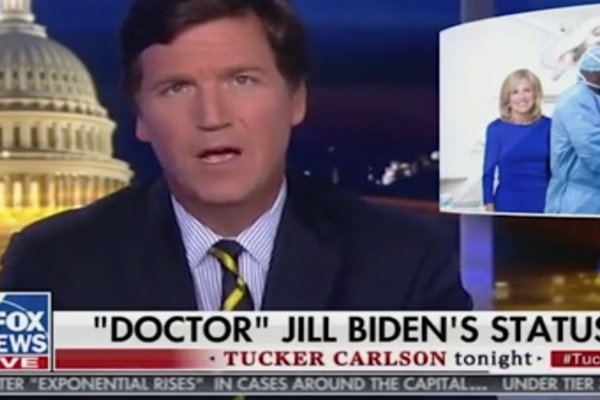 Carlson pointed to examples of the push against meritocracy in the name of diversity and inclusion in the U.S. Armed Forces, which could be accelerated under a Biden administration.

CARLSON: If you’re a sane person, it’s easy to dismiss woke activism as a kind of childish sideshow that plays out mostly on college campuses and public radio shows, the cringing self-hatred, the hair on fire hysteria, the total obliviousness to historical reality.

The whole thing is like an adolescent rage fit that goes on forever. Honestly, it’s kind of hilarious.

At the University of Wisconsin last month, child activists convinced administrators to move a bolder on campus because they claimed it represented bigotry. It was a racist rock. That actually happened along with countless other things like it.

Our grandchildren going to read about this moment, and they’re going to laugh in disbelief. That’s been our assumption anyway.

But what if the current lunacy turns out to be more than a passing phase? What if woke race obsession is not a fad, but instead an incurable brain virus that’s infected our country’s entire leadership class? If that’s the case, then we’re in trouble.

Our grandchildren won’t laugh about what’s happening right now. In fact, at this pace, a lot of Americans won’t have grandchildren.

Over the weekend, MSNBC assembled a panel of the usual highly credentialed geniuses to plan Joe Biden’s presidential candidate. Watch this and notice the criteria they’re using to staff your Federal government.

UNIDENTIFIED FEMALE: I know this is the first time so far that there has not been an Asian-American, Pacific Islander with the Secretary title. But there have been some Cabinet-level positions named.

Where do you stand on the representation issue when it comes to the Biden Cabinet?

UNIDENTIFIED FEMALE: We need to make sure that this is a Cabinet that like every single administration for the past 20 years, has a Secretary in the Cabinet that is Asian-American.

UNIDENTIFIED MALE: So it makes sense that that Attorney General would be a black person who models the value as we move past this dependency, this reliance on the carceral state.

JANET MURGUIA, PRESIDENT AND CEO, UNIDOSUS: I will say as it relates to Latino and Latinas, another factor is that we need to see gender — there’s diversity within our diversity. And for us, it’s going to be very important in the Hispanic community see a Latina in the Cabinet.

Notice there was no mention whatsoever of competence, or expertise, or any other quality that might actually help our country. Got the relevant background to run, say the Energy Department? Who cares? You’re the wrong color. No dice.

When it comes to hiring Cabinet Secretaries, outdated ideas about the common good no longer play a role. This is the ugliest kind of race politics dividing up the spoils along color lines. If you want the job, you had better look like me.

How did the country as impressive as ours get to a place this low? As with all journeys, the answer is slowly and then all at once. But we’ve definitely arrived.

To our leaders, identity is all that matters. That’s official.

Watch America’s highest-ranking guilty white guy, explain how he is hiring the people who run the Federal agencies.

After today, our Cabinet won’t just at be one of or two precedent breaking appointments, but 12, including today’s long overdue appointment of a first Native American Cabinet Secretary.

Already, there are more people of color in our Cabinet than any Cabinet ever, more women than ever.

CARLSON: Again, Joe Biden isn’t even bothering to try to convince you that he is choosing the most competent people for key jobs. Instead, he is telling you what they look like. Their appearance is what matters. It’s all that matters.

So it turns out your mother was wrong. You can judge a book by its cover. In fact, you’re now required to.

What are the consequences of this kind of thinking? Over time, identity politics will destroy our country. No nation can remain unified for long if people are encouraged to think of themselves as members of competing ethnic groups, first; and citizens, second.

Countries need a reason to hang together. Unity doesn’t happen by accident. The fixation on race that has seized leadership class guarantees disunity – – permanent disunity. It’s terrifying if you think about it. But actually, it could be worse than that.

What if the woke brain virus began to infect the last remaining meritocracy in this country, the bedrock guarantee of our safety and our freedom? That’s the U.S. military. If that happened, it would be a legitimate disaster.

Last week, the Acting Secretary of Defense, a man called Chris Miller announced that the U.S. military will be changing its standards from top to bottom, not to create a more effective fighting force to save your children from China or other foreign domination, no.

In order to conform to policies formulated by the Pentagon’s so-called Diversity and Inclusion Board — and you can imagine what those policies are — strict affirmative action, hiring and promoting by appearance, the elimination of objective standards.

According to Secretary Miller — who should be ashamed of himself — extremists left-wing social engineering is, quote, “A moral imperative in the Armed Forces.” He did not explain why this was a moral imperative.

Not long ago, an Air Force psychologist called Ryan Warner gave us a glimpse into the thinking behind decrees like this. Warner, whose job it is, keep in mind, to keep America free and safe, instead spends his time pondering the death of a man called George Floyd in Minneapolis.

He has decided that something called microaggressions are to blame. Watch.

RYAN WARNER, AIR FORCE PSYCHOLOGIST: … an innocent human being, they may not seem like a big deal and stuff, but as we see in today’s society, similar to what happened to George Floyd, those microaggressions, those unconscious bias can ultimately lead to more dangerous and severe impact.

CARLSON: Like Secretary Miller, Ryan Warner should be ashamed of himself. Neither one is, of course, both men are merely symptoms of a larger long-brewing problem that unfortunately, the rest of us have ignored for a very long time.

While the rest of the country is focused on the remarkable heroism of, for example, SEAL Team 6 we’re focusing on, much of our military’s leadership was moving in another direction. They have now come to resemble the Anthropology Department at Wesleyan.

Three years ago in September 2017, for example, a General called Jay Silveria went on this rant after a supposedly hate crime took place at the Air Force Academy. Watch.

LT. GEN. JAY SILVERIA (RET), U.S. AIR FORCE: You may have heard that some people down on the Prep School wrote some racial slurs on some message boards. If you haven’t heard that, I wanted you to hear it from me.

And if you can’t treat someone from another race or a different color skin with dignity and respect, then you need to get out.

CARLSON: Settle down, tough guy. The hate crime was a hoax like so many hate crimes that are reported in the media. It never happened.

But this man, the General you just saw apparently has forgotten that, he is mouthing the words to him written by the hard left and no one stopped him or many like him, and so the brain virus spread throughout the U.S. military.

A presidential campaign slogan was white supremacy, according to the Army. Yet, no one did anything about that.

Now, according to the Army’s Equity and Inclusion Agency, and yes, they have one, the phrases, “All lives matter,” “American exceptionalism” and “The celebration of Columbus Day” are racist. This is from the Army, the people who should be protecting you.

The head of the Defense Intelligence Agency, Lieutenant General Robert Ashley recently encouraged his employees to read the lunatic track “White Fragility” by Robin DiAngelo, a book that is inherently bigoted, and also stupid.

Again, this is the military supposed to be protecting you, instead, they’re reading “White Fragility.”

Over the summer, Kaleth Wright, the Chief Master Sergeant of the Air Force at the time, proclaimed on Twitter that his greatest fear was that one of his airmen might be killed by a racist cop, not killed by the Chinese military, but by American racism, and so on.

Where does this end? Can you protect a nation with a military like this?