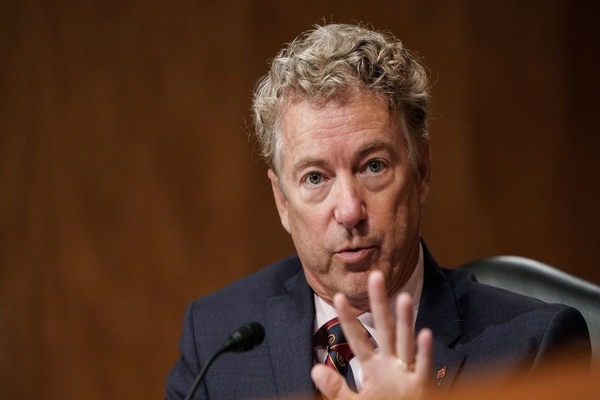 MARLOW: You have a terrific speech … and you started with something that I wasn’t anticipating, but I absolutely loved, and that’s some actual science about the mask mandates. You broke it down in a very clear way. Talk to us about it.

Every one of the mandates — and you look in country after country, state after state — you look at when the mask mandates went in — the incidents went up exponentially after the mandates. Restaurants, nobody can eat in a restaurant, there’s no science behind any of that.

Middle seat missing on the airplane, you really think you’re like 12 inches from the other guy instead of six inches, it really makes a difference?  None of it really makes any sense, and there’s no epidemiological evidence. You know, it’s like, ‘Wash your hands, stand six feet apart.’

There’s no evidence that that slowed down the [spread]. … The trajectory of the virus hasn’t been altered at all by any of these things. I think the vaccine will, and this is why I really despise people like the CNN Doctor [Sanjay] Gupta, who I think is committing television malpractice by saying,  ‘Oh, your mask is a much better thing than the vaccine.’ Well, no, it isn’t. The masks aren’t working at all. The thing’s going through the roof and people are dying. Why would you want to discourage someone from taking a vaccine and say,  ‘Oh wear the mask.’?

And the masks are different, too. The N95 mask actually does work to a certain extent, if worn properly and used [with] sterile technique. In the hospital, our doctors — I have a brother and sister who are doctors, they wear the N95 mask, and it’s kept them from getting infected — but there’s no value to the cloth mask, at all.

MARLOW: That’s why I call it a face diaper. So you’ve got a public who has accepted this, though, by and large, because we’ve been told by everyone we have to accept it. Have we lost track of the Constitution? Have we forgotten about the Constitution?

Paul highlighted Director of the National Institute of Allergy and Infectious Diseases Dr. Anthony Fauci’s ongoing advocacy for mask-wearing as a protective measure for public health.

“If Fauci has his way, you’ll never give up on the mask,” warned Paul. “It’s all about submission. They want you to submit to their will, whether there’s any science. In fact, like on schools, I’ve been telling Fauci for six months, the evidence is that if you open schools, you will not get a surge. The whole world accepts it, except for Dr. Fauci. He finally accepted it last week, six months after I started showing him the evidence.”

Last week, CNN published an article entitled, “Why a Covid-19 vaccine doesn’t mean that you can stop wearing a mask.” CNN’s top medical reporter, Dr. Sanjay Gupta, described the coronavirus as “especially deadly” while advising people to “double the usual six feet [of distancing] to 12 feet” in gyms due to “heavy breathing.”

Democrats and the broader left regularly advocate for continuation and expansion of assorted and arbitrary lockdowns and shutdowns against businesses, religious organizations, and particular political demonstrations.