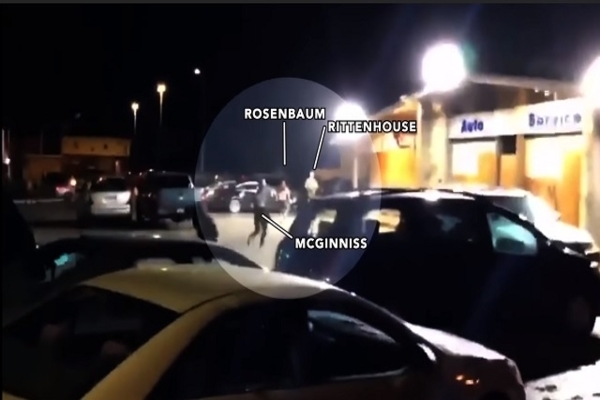 (informationliberation) – Kyle Rittenhouse’s attorneys on Tuesday afternoon released a detailed breakdown and timeline of the Aug 25 shooting during the riots in Kenosha with additional footage and explanations of exactly what went down that fateful night.

Of note, the FightBack Foundation video highlights how 36-year-old registered sex offender Joseph Rosenbaum — who was seen screaming “Shoot me n*gga!” at an armed guard — appears to have “focused” his anger on a young man dressed almost identically to Rittenhouse during the confrontation at a gas station, which they say started after a dumpster fire was extinguished.

They say “fire-starter” Rosenbaum was “seen starting more fires” shortly after that incident down the street along with video which appears to show that being the case.

“Around that same time, Kyle Rittenhouse was spotted running with a fire extinguisher,” the video says.

Rosenbaum was next seen chasing Rittenhouse down the street, throwing an object at him and charging him before getting shot.

“The Kenosha County circuit court assigned a bail amount of $2 million,” the video says. “Kyle Rittenhouse, a lifeguard who risked his safety to protect his community and give aid to wounded protesters was the only one charged with a crime — not one of his attackers faced a single charge.”

“A 17-year-old American citizen is being sacrificed by politicians — but it’s not Kyle Rittenhouse they’re after, their end game is to strip away the constitutional right of all citizens to defend our communities, our personal property, our lives and the lives of our loved ones.”

Attorney L. Lin Wood, who set up and organized Rittenhouse’s legal defense team and his legal defense fund at FightBack.Law, predicted the video will likely be censored from YouTube and uploaded additional copies of the video to their website and on LBRY.