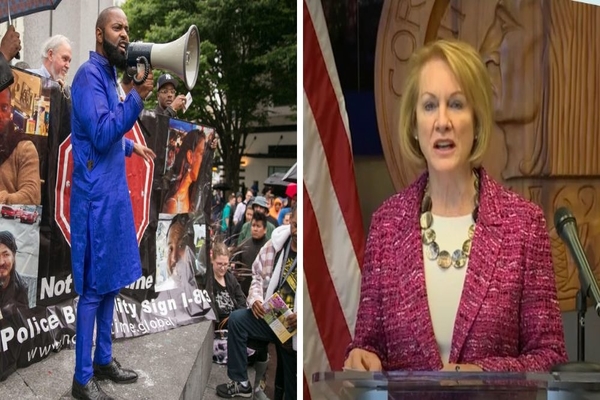 (breitbart) – A man who had led violent protests in Seattle, Washington, and who was convicted of running a prostitution operation — including pimping underage girls — now has an office in the city’s municipal building and a paycheck of $150,000 a year to act as a “street czar” to advise on “reforming” police.

“A street czar is a person who has a particular genius in a particular area,” Andre Taylor told Seattle-based KOMO News. “I know the term ‘street czar’ is quite provocative.” He went on:

Black people are not normally paid for positions nor their organizations but white people with the same positions are paid and this is an ongoing problem not only here but all over this country. White people have been paid for some of the same stuff and nobody has ever said anything about it. But the moment a black man demands respect and you value the work and you want to use my credibility, that should have some value to it.

The New York Post reported on the city’s new hire:

Taylor first found notoriety in Las Vegas, where he was sentenced in 2000 to more than five years in prison, serving little more than a year, the Seattle Times previously noted. Some of the girls he pimped for were underage, according to court reports in the Las Vegas Sun.

“I was born from the streets; I come out of the deep darkness,” he said in a YouTube video earlier this year, bragging how he “had children with some of the women who were with me” when he was a pimp.

“We decided we were going to be in this subculture, like the Mafia, whether you liked it or not,” he said of his life. “We knew you considered us the waste of the world from the beginning. We didn’t care what you thought about us … just like I don’t care what you think about me now.”

Taylor also was one of the organizers of the “Capitol Hill Occupied Protest,” or CHOP, zone and said protesters should demand $2 million from the city to give up the occupation, according to the Seattle Times.

“Don’t just leave,” Taylor told Antifa and anarchists in Seattle. “Leave with something.”

This isn’t the first time Seattle has paid Taylor with taxpayer funds. The Post reported that his organization, Not This Time, was paid $100,000 last year to sponsor a speaker series called “Conversations with the Streets.”

“Mayor Jenny Durkan’s spokesperson Kelsey Nyland told the Seattle Times the contract was offered because of an ‘existing working partnership,’” the Post reported. “[Taylor] came to Seattle in 2016 after his brother, Che Taylor, died in a police shooting — saying he was ‘here to go to war,’ the Seattle Times noted.”