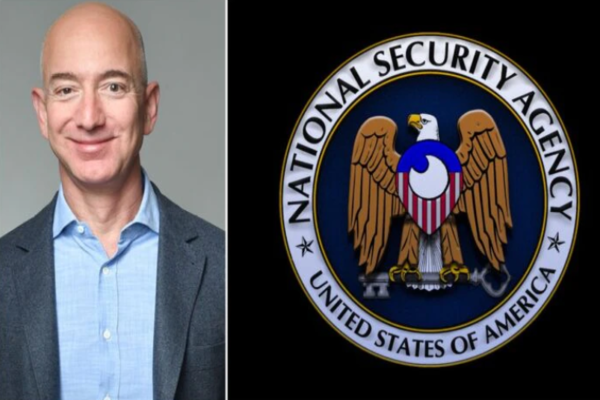 In another example of how Big Tech supremacy hurts the freedoms of the American people, Amazon signed the contract “WildandStormy” to provide cloud computing services for the spying monolith that has made a mockery of the 4th Amendment.

Microsoft is filing a protest on the contract, believing that it was awarded unfairly to Amazon, a company that has proven it will serve the deep state at every turn.

“We are exercising our legal rights and will do so carefully and responsibly,” they added.

Amazon received a $600 million contract to provide cloud computing services for the Central Intelligence Agency (CIA) in 2013. They soaked up a good portion of the follow-up deal for the CIA’s C2E contract in 2020, which was worth billions. They have deployed litigation to keep their main competitor Microsoft from lucrative federal contracts as well.

“[The NSA’s award] just reiterates that Amazon is still the cloud provider to beat across the federal government,” said Chris Cornillie, an analyst at Bloomberg Government. “Microsoft has come a long way and made it a two way horse race in government, but Amazon was forming relationships and gathering security certifications a decade ago and Microsoft is still playing catch-up.”

This move is believed to be part of the Hybrid Computer Initiative launched by the NSA. They will essentially be giving access to the treasure trove of data illegally gathered from Americans and foreigners to Amazon for cloud computing services, which could be considered a major national security breach considering Amazon’s ties to China.

Big League Politics has reported on how the NSA has stepped up their illegal spying in recent months, targeting journalist Tucker Carlson of Fox News for attempting to interview Russian President Vladimir Putin:

“Renegade left-wing journalist Glenn Greenwald appeared on Fox News’ Tucker Carlson Live on Wednesday night where he discussed the implication of the news that the National Security Agency (NSA) leaked Carlson’s communications with regards to Russia.

Carlson had reached out to Russian President Vladimir Putin for a potential interview, something that other popular media figures have done in the past. Carlson has obtained evidence showing that the NSA leaked these details to left-wing reporters as part of a smear campaign meant to impugn his reputation. Greenwald believes that the NSA committed a criminal act with these leaks, either intentionally or unintentionally.

“There was either a failure to hide your identity as required by law which is illegal, or an attempt to unmask it after it was minimized which is also a crime given that there’s no national security justification for doing it,” Greenwald said.

“It is one of the gravest crimes in the U.S. code for the NSA to leak the contents of communications that it intercepts between a foreign official and an American citizen,” he added.

Greenwald explained how the deep state leaked information to the Washington Post in order to implicate General Michael Flynn in 2017, and how the fake news hacks looked the other way because they wanted to damage the incoming Trump administration.

“That’s the reaction here, ‘Oh, it’s Tucker Carlson, he’s a conservative, we don’t like him, and so we don’t even care if the NSA was doing this,’ but it is illegal,” Greenwald said.

Greenwald also brought up a years-old clip of MSNBC host Rachel Maddow with Sen. Chuck Schumer (D–NY) where the swampy lawmaker admitted that the intelligence community destroys anyone in Congress who doesn’t bow to their illicit agenda.”

Big Tech is fueling the NSA to become even more powerful as they destroy the rights of the American people. The Orwellian nightmare is rapidly becoming an inescapable eventuality due to this collusion between the public and private sectors.