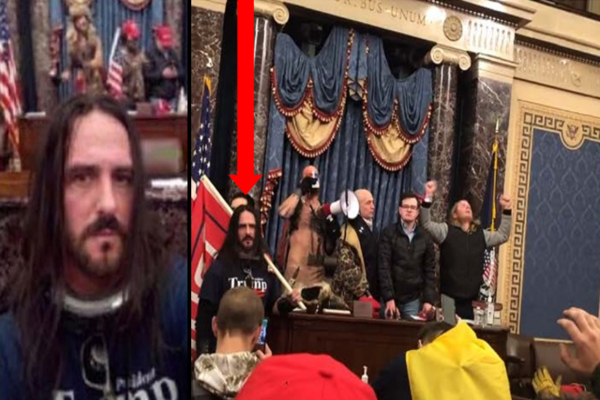 Peaceful Jan 6 Capitol protester Paul Allard Hodgkins was maliciously overcharged by the feds with “obstructing an official proceeding of Congress” and faced 20 years in prison for the crime of taking a selfie on the Senate floor with others as they “cheered and said prayers.”

Hodgkins only spent 15 minutes inside “the People’s House” but after being threatened with two decades in prison he accepted a plea deal last month leaving him facing a recommended sentence of 15 to 21 months.

Obama judge Randolph Moss on Monday sentenced Hodgkins to 8 months in prison rather than a maximum 20 years and gave a self-righteous lecture about him taking part in an “assault on our democracy.”

In pronouncing the sentence, Judge Randolph Moss said that Hodgkins had played a role, if not as significant as others, in one of the worst episodes in American history. Still he chose to give Hodgkins a year less in prison.

“That was not, by any stretch of the imagination, a protest,” Moss said. “It was … an assault on democracy.” He added: “It left a stain that will remain on us … on the country for years to come.”

How does one take part in an “insurrection” or a “assault on democracy” without violence?

Antifa attacked Trump supporters and rioted all over DC during Trump’s inauguration in 2017 and they ended up getting rewarded for it with the city handing them a $1.6 million settlement.

BLM and antifa rioters wrecked havoc in DC during the Summer of Floyd and even firebombed the historic St John’s Church across from the White House.

No one got punished for that “assault on democracy” and the media sure as hell didn’t describe it as an “insurrection.”

Whereas Capitol protesters are being held in indefinite detention and tortured in jail by racist jail guards, BLM were rewarded for their riots with $10.6 billion in various pledges from Corporate America!

The fact we now have a two-tiered justice system couldn’t be any clearer!