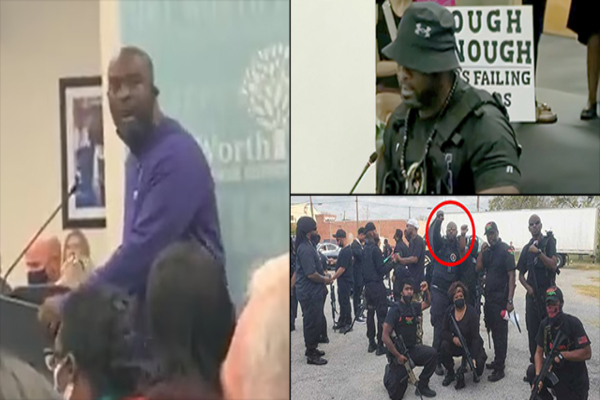 (IL) – A black militant threatened parents opposed to anti-white brainwashing in public schools at a school board meeting in Fort Worth, Texas by telling them he’s got “1,000 soldiers ready to go” and they’re going to come back “locked and loaded.”

In the Fort Worth Independent School District board meeting on Nov. 9, Malikk Austin turned to address the parents who had spoken up about critical race theory.

“For those who got an issue with this critical race theory equity, this is something I fight for, for my children,” Austin, who is African American, began. “How dare you come out here and talk about the things that my daddy and my grandparents went through, the lynching, the oppression, Jim Crow, and my kids are still being afflicted by this.”

The Daily Mail reported Austin’s Facebook page “indicates that Austin is a member of The Brotherhood Movement, but a spokesperson for the group told DailyMail.com that he has ‘moved on’ from the organization.”

The Brotherhood Movement is a black militant group known for holding armed marches through the streets.

If Austin was a white militant who went to a school board meeting in Dallas and threatened black parents that he has “over 1,000 soldiers ready to go” and they were going to come back “locked and loaded” he would have been raided by the FBI and thrown in prison in under 24 hours.

It has been nearly a week and we’re only finding out about this story now thanks to Turcios tagging Rufo and others on Twitter to get the story some attention!

I guess Merrick Garland is too busy organizing terroristic raids on Project Veritas for the “crime” of doing journalism to lift a finger!