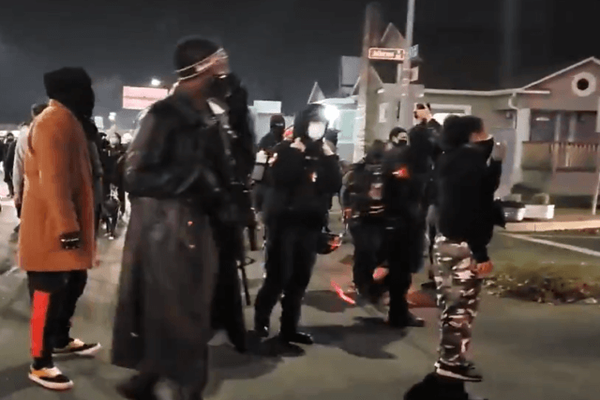 (breitbart) – Protests erupted in Eugene, Oregon, Friday night following the shooting of a black man armed with a knife. The man allegedly charged police with a knife after violating a domestic violence protective order. The man remains hospitalized in critical condition.

The video shows at least one of the men armed with a rifle.

The caller told police Sharif fled the scene while being armed with a knife, KEZI ABC9 reported. Police arrived in the area and found the subject in an alley. Officials report the violation of a protective order mandates an arrest.

Sharif allegedly charged the officers while brandishing a knife. Officers shot the man, stopping the threat. Officers administered first aid until an ambulance arrived and transported the subject to a hospital where he remains in critical condition.

Other videos tweeted show protesters continuing their march on the streets of Eugene. The videos are filled with profanity.

Bob Price serves as associate editor and senior news contributor for the Breitbart Texas-Border team. He is an original member of the Breitbart Texas team. Price is a regular panelist on Fox 26 Houston’s Sunday-morning talk show, What’s Your Point? Follow him on Twitter @BobPriceBBTX, Parler @BobPrice, and Facebook.