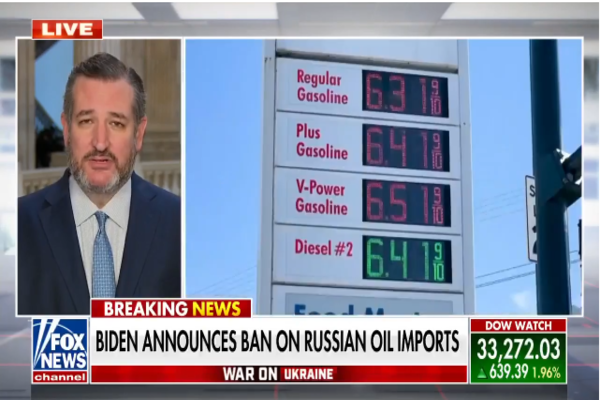 As Biden weighs buying oil from the likes of Venezuela and Iran, Cruz called the administration’s energy policy “completely incoherent.” He added that it “makes it no sense.”

“I’ve got to say this administration’s policy when it comes to energy is completely incoherent,” Cruz asserted. “President Biden started literally his first day in office basically declaring war on domestic energy production. He shut down the Keystone pipeline on the first day in office, killed 11,000 jobs, 8,000 union jobs with the stroke of a pen. He halted all new leasing on federal lands — both onshore and offshore — and he stopped development at ANWR, a small region of Alaska that is incredibly rich in oil reserves. He shut them all down. His agencies have been waging war on domestic production, and we’ve seen domestic production dropping and dropping and dropping, and bizarrely enough, Biden combines that with being the best thing that ever happened to Vladimir Putin and the best thing that ever happened to Iran and the best thing that ever happened to Venezuela.”

“Last week, the Biden administration sent their officials to Venezuela saying they want to buy oil from Nicolas Maduro. They’re in Vienna trying to negotiate a deal that they want to buy oil from the Ayatollah in Iran, and Biden last year waived sanctions on the Nord Stream 2 national pipeline, which is what caused the invasion of Ukraine. Their policy just makes no sense,” he added.