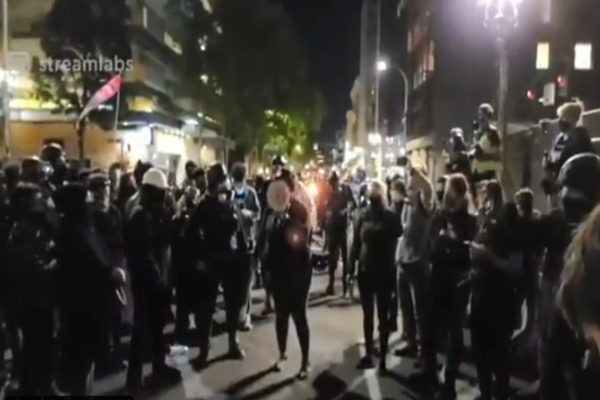 (breitbart) – Burning, rioting, and looting broke out in Minneapolis on Friday night after deputies shot and killed a wanted felon who fired on them. Deputies assigned to the U.S. Marshal’s Fugitive Task Force attempted to take the man wanted for being a felon in possession of a firearm into custody.

Police officials in Minnesota say the U.S. Marshal’s Fugitive Task Force attempted to arrest 32-year-old Winston Boogie Smith on June 3 for a warrant for being a felon in possession of a firearm, the Associated Press reported. As sheriff’s office deputies assigned to the task force approached Smith’s vehicle, he reportedly refused to comply with orders and pulled a handgun. Officials confirmed Smith fired at least one shot from inside his car.

A statement from the Marshal’s Service said Smith was in a parked vehicle and “produced a handgun resulting in task force members firing upon the subject.” Smith died at the scene from wounds from two deputies’ shots.

The Minnesota Bureau of Criminal Apprehension reported that state investigators found a gun in Smith’s car along with a spent cartridge indicating Smith fired from inside his vehicle, the AP article states.

Following the shooting on Thursday, rioters marched in the streets, set fires, and began vandalizing and looting businesses, the AP reported. Police arrested nine people on charges following the night of violent activity.

Rioters protesting the shooting of the wanted felon who allegedly fired at agents attempting to arrest him began looting a TMobile store, Brannon tweeted.

Another video re-tweeted by Brannon shows someone performing CPR on a person who was allegedly shot during the riots.

It is not clear from the tweets who shot the person or what if they survived.

Another person was seen being treated on the street for an unknown injury.