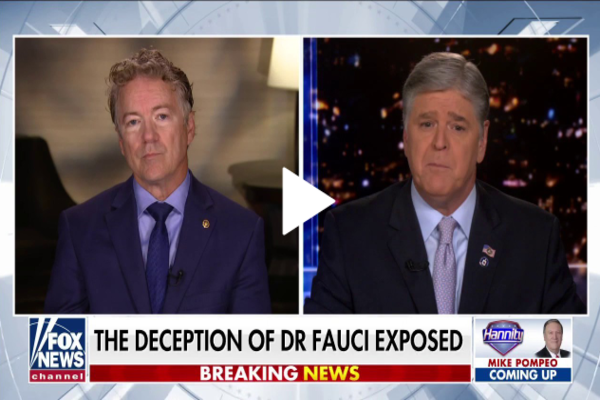 According to the Kentucky Republican lawmaker, Fauci’s trust in Chinese scientists was misguided and said that the impact of the globe’s current bout with COVID-19 could be minuscule compared to other viruses the Wuhan Laboratory of Virology was allegedly researching.

“You know, there’s been no more prominent scientist in favor of gain of function research than Dr. Fauci,” he said. “He still hasn’t backed off of that position. He believes that it’s OK to take animal viruses, make them into super viruses to infect humans, even if a pandemic should occur. He says, oh, the research is worth it. But, you know, there’s a host of other scientists in this field, and they say it’s not worth it at all, that we haven’t learned anything. All we’ve done is put ourselves at risk.”

“But even after all of this evidence points towards the Wuhan lab, this last week in committee, Dr. Fauci said that he still trusts the Chinese scientists, and the thing is that’s a very naive notion,” Paul continued. “That’s how we got here. But there are worse viruses. This is a bad one. This has about a one percent mortality, three and a half million people have died, but they’ve been experimenting with some viruses that have 15% mortality. That would mean 50 million deaths right now.”

“So, this kind of research needs not to be funded by the U.S. taxpayer, and so I had an amendment this week that passed actually unanimously saying no more funds for this Wuhan lab,” he added. “So, we’ll see what Dr. Fauci has to say, but he doesn’t really have the judgment to be in the position he’s in.”