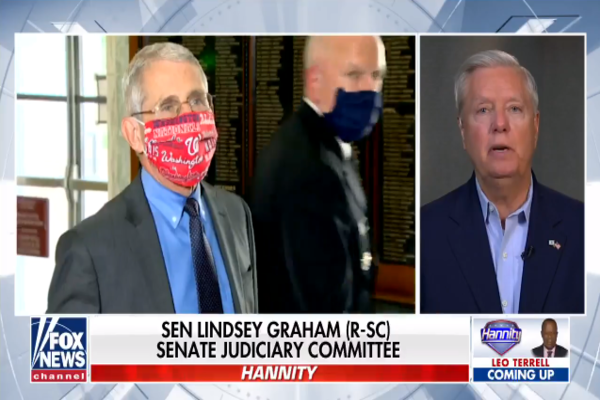 (breitbart) – Thursday, during an appearance on Fox News, Sen. Lindsey Graham (R-SC) suggested that National Institute of Allergy and Infectious Diseases director Dr. Anthony Fauci make an appearance before Congress to explain some of the inconsistencies of his statements pertaining to the COVID-19 pandemic, some of which were contradicted by email correspondence recently uncovered by a Freedom of Information Act request.

Graham focused on Chinese government research, some of which came from U.S. taxpayer funds.

“Well, number one, it seems to me, China’s got a lot of money,” he said. “They can pay for their own research. But the most stunning thing out of your monologue to me was the idea that Dr. Fauci doesn’t believe that it’s in China’s interest to lie about the leak from their lab. The person from NBC asked him, isn’t it in their interest to lie to the world and not admit it came from their lab because it’d make them look terrible? If you can’t figure that out, then you’ve got a real problem on your hand.

“Candor and openness and transparency do not go in the same sentence when it comes to China,” Graham continued. “So, what to do? Call Dr. Fauci before the Senate and the House, allow the people in the State Department who were silenced about pushing the lab leak theory to have their say, hold those responsible who shut down this conversation, make sure they’re fired, and get to the bottom of what happened. And finally, introduce sanctions, bipartisan, against China if they don’t cooperate with an international community. They will never tell you the truth until they’re made to do so.”