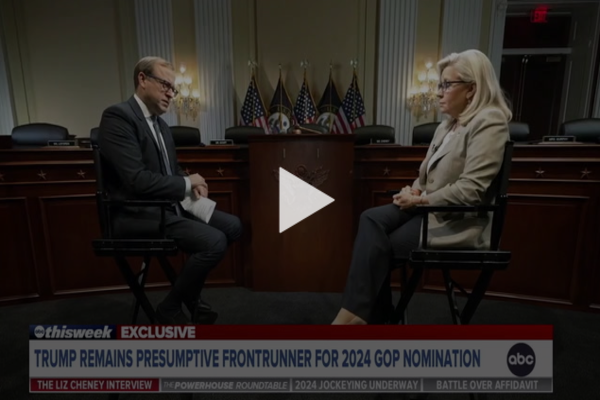 (breitbart) – Representative Liz Cheney (R-WY) said Sunday on ABC’s “This Week” that she was “ashamed” that Republicans like Sens. Ted Cruz (R-TX) and Josh Hawley (R-MO) and Gov. Ron Desantis (R-FL) are unfit for the presidency.

ABC News chief Washington correspondent Jonathan Karl said, “Is the threat Trump or bigger than Trump? You could argue Trumpism, in terms of election denying, has taken over the party.”

Cheney said, “Donald Trump is certainly the center of the threat, but election denial, denying the fundamental function and principle, at the center of our constitutional republic is dangerous, broadly speaking. He’s certainly leading that effort and leading that movement. He also, because we know precisely what he will do because he’s done it, sending an armed mob here to the Capitol to try to overturn the results of an election. There’s simply no way the nation can, in my view, sustain itself if we excuse that and put him in a position of power again. ”

Karl said, “You’re going to work against election deniers, if it’s not Trump and if it’s somebody like Ron DeSantis, Ted Cruz, Josh Hawley, these are all people who tied them closely to Trump, will you oppose them? Can you see yourself supporting any of them?”

Cheney said, “It would be very difficult. When you look at somebody like Josh Hawley or Ted Cruz, both of whom know better, both of whom no exactly the role of Congress is in terms of our constitutional obligations with respect to presidential elections, and yet both of whom took steps that, that fundamentally threatened the constitutional order and structure in the aftermath of the last election. So, you know, in my view, they both have made themselves unfit for future office.”

Karl said, “What about DeSantis?”

Cheney said, “DeSantis, who is right now campaigning for election deniers, and I think that’s something that I think people have to have real pause about. Either you fundamentally believe in and support our constitutional structure, or you don’t.”