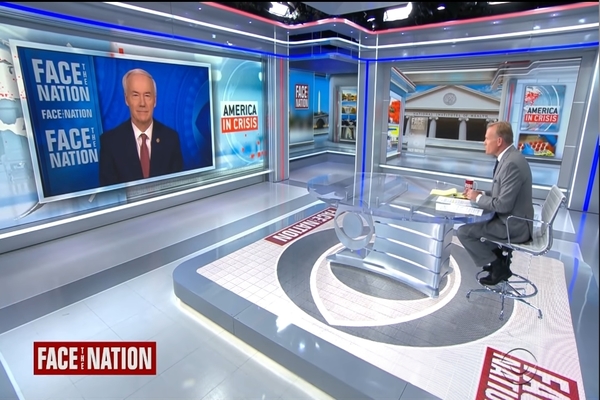 JOHN DICKERSON: It’s good to have you. I want to start with schools and masks before we move on to the bigger issue of vaccinations. But they’re related because in schools, those under 12 can’t get vaccinated. You signed a bill that was against mask mandates. You changed your position. Why?

HUTCHINSON: Well, facts change and leaders have to adjust to the new facts that you have and the reality of what you have to deal with. Whenever I signed that law cases were low. We were hoping that the whole thing was gone in terms of the virus, but it roared back with the Delta variant. And whenever, you know- we’re pushing the vaccines out, but those under 12 cannot get vaccinated in the schools. And so I realized that we needed to have more options for our local school districts to protect those children. And so I asked the legislature to redo the law that prohibited those requirements or those options for the school districts to protect the children. And so it was an error to sign that law. I admit that. Thank goodness if the legislature did not act this week, which they didn’t, the court stepped in and held that as unconstitutional. And now we have that local flexibility for schools to make their decision to protect the children based upon the unique circumstances of their district.

DICKERSON: When you say facts change, do you see something in the last few weeks, particularly with respect to those under 12 who are in hospitals who are getting COVID? Did you see and learn more about the way in which the Delta variant is affecting that specific part of your community?

HUTCHINSON: We have. And part of it is that the Delta variant is so transmissible that it affects every population. The higher age group populations have been vaccinated. So we’re seeing 40 year olds in the hospital and on vents and- and then it goes down. And while the children are less susceptible to it and have less at risk, still a small number of children find themselves in the hospital. We’ve had over 24 in our children’s hospital. We’ve had three adolescents die. They couldn’t be vaccinated. And- and so I look at that and I say that we’ve got to do everything we can to protect those children. Everybody else can be vaccinated. And I’m pushing those vaccinations. We don’t need other stringent measures there because vaccine is their solution. But for those under 12, we want them to go to school and we need to have that flexibility because they do have some risk.

DICKERSON: I want to get to the vaccine solution in a moment. But quickly, about the Marion School District. I think there are about 900 students and teachers in quarantine. Do you feel like that wouldn’t have happened if the school district had had the freedom of local control and the ability to have a massive mandate in that school district?

HUTCHINSON: Well, if we would have had more vaccines out, those numbers would have been less. But it illustrates the point that if we’re going to have a successful school year, school districts like Marion need to have that option to require masks for those lower grades or make the decision that’s suitable for their community. But let me emphasize a point here that ordinarily you have about 2.5 contacts from one exposure that has to be quarantined. But in the school environment, it was more like 18 to one. And so that’s why we had so many that were quarantined. And you can’t have a successful school year with that kind of exposure in the school. And so vaccines, as well as flexibility of the local school district would be the key, in my judgment.