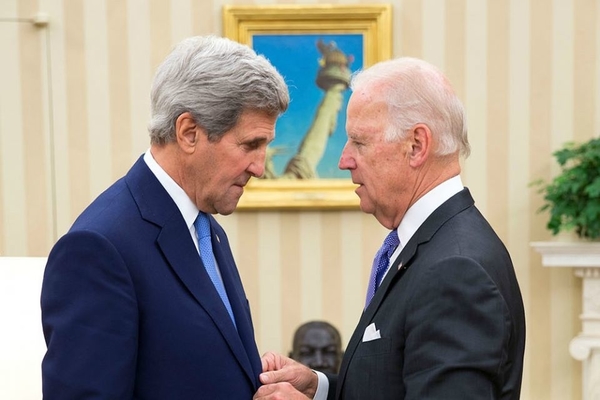 Kerry defended his high-pollution ride at the time, calling it “the only choice for somebody like me who is traveling the world to win this battle” in an interview obtained by Fox News. The incident had not been previously reported in the American press.

Kerry received the award, which took the form of an iceberg sculpture, for being “a consistent voice pressuring the American authorities to commit to tackle environmental matters,” the outlet noted.

Icelandic reporter Jóhann Bjarni Kolbeinsson confronted Kerry at the event over his choice of transportation, asking: “I understand that you came here with a private jet. Is that an environmental way to travel?”

John Kerry speaking at the ceremony in 2019. (Arctic Circle via YouTube, File)

Kerry responded by claiming that it was the only way.  “If you offset your carbon — it’s the only choice for somebody like me who is traveling the world to win this battle,” Kerry said.

“I negotiated the Paris Accords for the United States,” he added, referring to the multilateral climate agreement signed while he was secretary of state under President Obama.

“I’ve been involved with this fight for years. I negotiated with [Chinese] President Xi to bring President Xi to the table so we could get Paris. And, I believe, the time it takes me to get somewhere, I can’t sail across the ocean. I have to fly, meet with people and get things done,” Kerry said, sidestepping the fact that he chose a private jet over a commercial flight.

“But, what I’m doing, almost full time,” he continued, “is working to win the battle on climate change, and in the end, if I offset and contribute my life to do this, I’m not going to be put on the defensive.”

Private jets have been estimated to emit upward of 40 times as much carbon per passenger as commercial flights.

It’s unclear how Kerry has been offsetting his carbon output, as he claimed, but flight logs indicated that his family’s private jet spent over 20 hours in the air over the past year — culminating in an estimated 116 metric tons of carbon emissions.

For comparison, a March 2018 report from Environmental Protection Agency (EPA) estimated that the typical passenger vehicle emits about 4.6 metric tons of carbon dioxide per year. That calculation assumed a car that drives around 11,500 miles per year with a fuel economy of about 22.0 miles per gallon.

The White House did not immediately respond to Fox News’ request for comment.

As Fox News previously noted, the Kerry family owned a private charter jet company from which the longtime Democrat appeared to benefit financially. As late as 2013, his executive branch personnel financial disclosure showed Kerry owning “over $1,000,001” in assets for the charter company Flying Squirrel LLC through his wife Teresa Heinz Kerry, heir to the Heinz ketchup fortune.

Biden’s climate proposal is estimated to cost at least $1.7 trillion. That could grow, however, depending on how Democrats negotiate with him in Congress, where progressives such as Rep. Alexandria Ocasio-Cortez have been adamant about passing the ambitious Green New Deal.

During the campaign, Biden said he would use the Green New Deal as a framework for his climate plan, although his proposal cost significantly less than other plans that adopted that framework. Regardless, Biden’s plan aims for the type of economy-wide transformation advocated by more left-leaning members of his party.

That included achieving net-zero emissions by 2050, which the Heritage Foundation has said would cost the economy millions of jobs, thousands of dollars in lost household income, and trillions erased from the nation’s gross domestic product.

Not only did the model crash, it failed to approach anywhere near the goal outlined in the GND. The closest Heritage was able to get was a 58% reduction in emissions, achieved through a $300 carbon tax  — taxes above $300 crashed the EIA’s model.

Within just weeks of assuming power, the Biden administration had already cost American jobs by revoking the federal permit for constructing the Keystone XL pipeline. TC Energy, the company that owns the pipeline, warned on Inauguration Day that doing so would “directly lead to the layoff of thousands of union workers.” Rob Darden, CEO at Distribution Contractors Association (DCA), similarly said completing the pipeline “would have created 10,000 good-paying American union jobs.”

Sen. Bernie Sanders, I-Vt., and Ocasio-Cortez, D-N.Y., maintain that the cost of inaction on climate change is unsustainable. According to Sanders, solutions like infrastructure and investment would boost the U.S. economy as well. Biden’s campaign website predicted his climate response could create 10 million “well-paying jobs.”

Sanders previously warned that without action on climate change, the U.S. would “lose $34.5 trillion by the end of the century.” He also predicted savings as high as $70.4 trillion over 80 years by “averting climate catastrophe.”