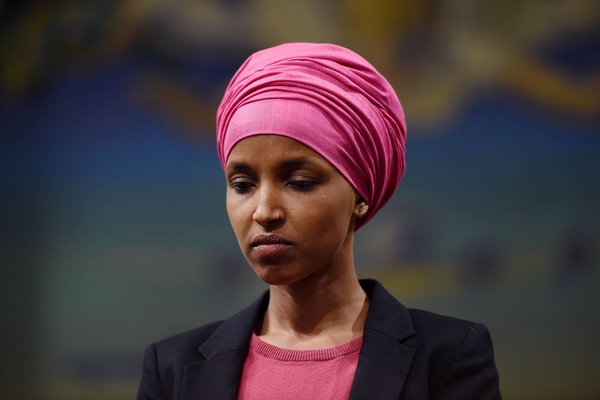 The lawmakers are seeking her removal by way of an amendment to counter a measure from Democrats to remove Rep. Marjorie Taylor Greene (R-GA) from her committee assignments because of her promotion of conspiracy theories and her alleged association with the far-right QAnon movement.

“The House is set to consider a measure this week that calls for Taylor Greene, a controversial first-term lawmaker known for support of the QAnon conspiracy theory, from her assignment on the Education and Labor Committee,” Fox News reported. “A proposed GOP-backed amendment to that measure calls for Omar, frequently identified as a member of the ‘Squad’ of progressive Democrats, to be removed from her committee assignments.”

The Daily Wire reported on the development:

Omar has an extensive history in trafficking in anti-Semitic conspiracy theories and tropes, including her claim that “Israel has hypnotized the world.”

Then-New York Times Columnist Bari Weiss noted that Omar’s anti-Semitic remark was similar to what was promoted in Nazi Germany.

“The Jewish power to hypnotize the world, as Ms. Omar put it, is the plot of Jud Süss — the most successful Nazi film ever made,” Weiss wrote. “In the film, produced by Joseph Goebbels himself, Josef Süss Oppenheimer, an 18th-century religious Jew, emerges from the ghetto, makes himself over as an assimilated man, and rises to become the treasurer to the Duke of Württemberg. Silly duke: Allowing a single Jew into his city leads to death and destruction.”

Immediately after winning her race in 2018, Omar changed her views on the anti-Semitic Boycott, Divestment, and Sanctions movement from saying it was “counteractive” during her campaign to saying that she “believes in and supports the BDS movement, and has fought to make sure people’s right to support it isn’t criminalized.”

“Many of the founding goals of the BDS movement, including denying the Jewish people the universal right of self-determination – along with many of the strategies employed in BDS campaigns are anti-Semitic,” the left-wing ADL said in a statement.

“Many individuals involved in BDS campaigns are driven by opposition to Israel’s very existence as a Jewish state.  Often time, BDS campaigns give rise to tensions in communities – particularly on college campuses – that can result in harassment or intimidation of Jews and Israel supporters, including overt antisemitic expression and acts.”

“Omar has spoken out against sanctions being used against nations like socialist Venezuela and the Islamic Republic of Iran, but reportedly has different views when it comes to sanctioning Israel,” the Daily Wire reported. “Omar is not the only Democrat that Republicans could seek to get kicked off of committee assignments as far-left Rep. Rashida Tlaib (D-MI) has her own history of making anti-Semitic remarks.”