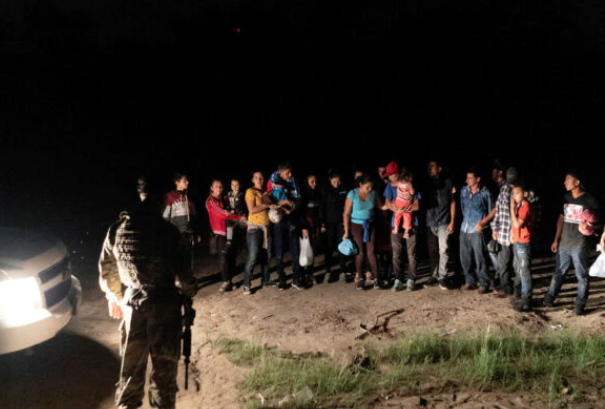 (bigleaguepolitics) – More than 1 million illegal crossings of the US-Mexico border will have been attempted over the first seven months of 2021, preliminary data indicates — proving yet another one of former President Trump’s predictions of a massive surge in illegal immigration should Biden enter the White House.

While US Customs and Border Protection (CBP) have yet to release the official number of border encounters that took place last month, The Washington Examiner reported calculations estimating the total at 188,000, an increase of just over 4 percent from the 180,034 apprehended in May.

Should this number be confirmed, it would be the most border crossings of any June in at least 21 years.

Perhaps most shockingly, the recent surge, which began during the Biden adminstration, puts CBP on track to make its millionth border stop of 2021 in the month of July.

A total of 711,784 apprehensions have been made by CBP in the first five months of this year. The Biden administration’s current border policy exempts virtually all illegal aliens who cross the border from custody or prosecution, resulting in many repeat attempts to enter the country.

“When you have open-border policies, people say, ‘I’m coming. I’m going to risk everything,’” former acting CBP Commissioner Mark Morgan told the Examiner. “That’s why I keep saying that the most inhumane thing we do for migrants is to open our borders because you are telling them that their lives are worth risking because once they get here, they are going to be let in, and that’s exactly what’s happening.”

The Arizona nonprofit Humane Borders, which maps the recoveries of bodies in the state using data from the Pima County Medical Examiner’s Office in Tucson, said Monday 43 sets of human remains were found around the state’s border just last month. Approximately 29 of those people had been dead for less than a week.

The Brooks County Sheriff’s Department in southern Texas reported 36 migrant deaths in the first five months of 2021, more than all of last year.

Last month, Rep. Tony Gonzales (R-Texas) said in an interview that county officials in the Lone Star State are asking him for more body bags to keep pace with the death toll.

“I sit in front of them and I go, ‘If I can do one thing for you, what would that be?’ And this is the ask I’m getting,” Gonzales told Newsmax. “They go, ‘Tony, we need more body bags.’ And I’m going, ‘Body bags? Why do you need body bags?’ They go, ‘Migrants are dying at record numbers, and we don’t have body bags to handle the situation.’ That’s what is happening on the ground.”

People across the political aisle have accused Biden and his administration of encouraging an open borders nation-state with recent policies, ranging from suspending construction of the border wall to the destruction of former President Trump’s ‘Remain in Mexico’ immigration policy, which required asylum seekers to stay on the Mexican side of the U.S. border while awaiting immigration court proceedings.