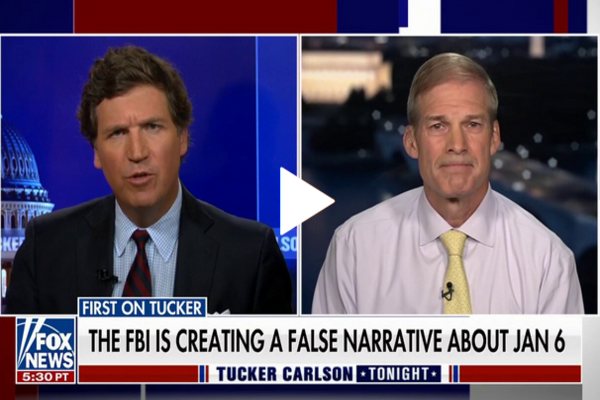 (breitbart) – Monday, during an appearance on FNC’s “Tucker Carlson Tonight,” Rep. Jim Jordan (R-OH) accused the FBI of “cooking the books” and “juicing the numbers” on the severity of January 6.

Jordan based that assessment on remarks from an FBI whistleblower’s account.

“Well, we think he is being straightforward,” he said. “We think he is honest. We think he’s a brave guy for coming forward. And I think, the way I view it in my mind is, Tucker, they are juicing the numbers, and they’re cooking the books, and they are so focused on this. They’re willing to pull agents from child trafficking cases to foster this narrative that you talked about that Joe Biden in front of Independence Hall with the red background, clenched fist talking about half the country being extremists.”

“So remember, we’ve had previous whistleblowers who came to us and said that they were being pressured to label cases as domestic violent extremism. This whistleblower came forward and talked to us about how they’re cooking the books, making the numbers seem that there are cases all over the country when in fact, they’re all related to January 6. And now what’s happened? Today, we learned that this newest whistleblower has been suspended from his job. So, there is retaliation going against this guy for coming forward and telling us what’s going on.”