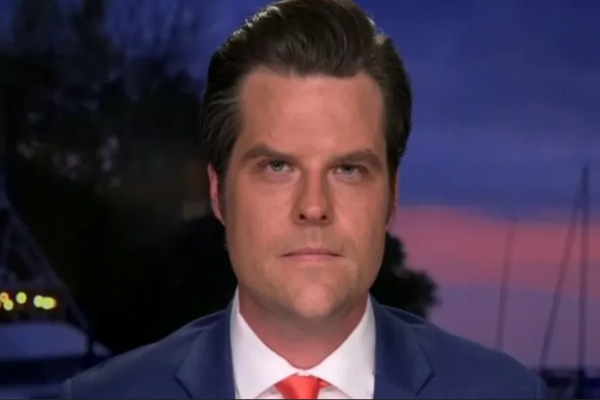 Gaetz lamented what he said was an absence of dramatic films with right-wing themes. He said My Son Hunter, directed by Robert Davi and produced by the Unreported Story Society, begins filling this political void within culture and entertainment.

“I expected a documentary, and I don’t know why, but it seems as though the right has really embraced the documentary format, oftentimes to the exclusion of creating compelling, gripping art,” he said. “We are in a culture war, right now, and the ammunition in that culture war can’t simply be our words and our beliefs, we have to actually have pieces of culture that are gripping and that draw people and that compel people and move people and persuade people, and this was, I thought, a great example of that from Breitbart.”

Gaetz speculated that My Son Hunter may be a step towards creating a new ecosystem of entertainment separate from the status quo of leftist-dominated companies and industries.

He remarked, “I started thinking, as I was watching the movie, is this really the front-end of the wave to creating a new ecosystem where there is collaboration and real effort put into not just the right substance of the argument, but the right aesthetic, the right musical score?”

My Son Hunter may be an impetus for talented right-leaning artists to coordinate and create alternative content dissenting from political orthodoxies pushed by the largest entertainment companies, Gaetz considered.

“I mean — oh my gosh — the performance you guys got out of your lead was, I thought, really a showcase opportunity in the movie, and I hope it is,” he stated. “I really hope that this inspires other people who have a talent that you might not normally align with politics, but might be entertainment and movies, music, that people could think of ways to connect with one another.”

He continued, “Gen Z is the most socially interconnected generation in all of human history, and so we ought to use pieces like the My Son Hunter movie as a springboard to try to create those connections and really try to lower our shoulder in this culture war fully armed, and that’s what I think the movie does.”

Gaetz credited My Son Hunter with not being overtly political, adding hope that the film would provide a model for more dissident films with broad appeal.

“So often, the stuff that we do in this space on the right has a very community theater feature to it, and and that was not this,” he shared. “This has got the blockbuster feeling, you know, a lot of people went out to watch Maverick, and what was unique about that is that there weren’t these cringe moments from the left. It was like it was almost uniquely kind of devoid of the barrage of politics that the left bakes into a lot of their blockbuster works.”

He concluded, “The unapologetic embrace of that from the right in My Son Hunter is something that that we need to see more of.”

Hunter Biden is the subject of a brand new narrative film, My Son Hunter, marking Breitbart’s expansion into film distribution. The film was directed by Robert Davi (Goonies, License to Kill, Die Hard) and stars Laurence Fox (Victoria, Inspector Lewis, The Professor and The Madman) as Hunter Biden; Gina Carano (The Mandalorian, Deadpool, Heist) as a Secret Service agent; and John James (Dynasty) as Joe Biden. It was produced by Phelim McAleer and Ann McElhinney (Gosnell movie, FBI Lovebirds: Undercovers) from the Unreported Story Society. The film is available RIGHT NOW for Streaming and Downloading at MySonHunter.com.

The trailer below has been viewed almost 5 million times across social media.