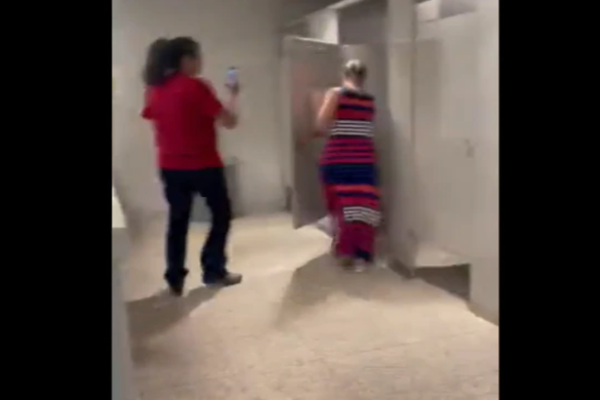 (bigleaguepolitics) – A video posted by the renowned @libsoftiktok Twitter account today showed a couple of students who appear to be involved with Lucha, a far-left socialist pro-illegal immigration student group at ASU, harassing Arizona Senator Krysten Sinema (D) at what appears to be Arizona State University in Tempe, Arizona.

A group of people that appear to be ASU students, affiliates of Lucha, or both can be seen following and yelling at Sinema around the building.

The group denied Sinema any privacy, continuing their harassment and pursuit even when the senator entered a bathroom stall.

A second video showed the group yelling even more indignantly at Sinema after her bathroom trip, following the senator until she entered a classroom and closed the door.

Yelling by the harassers indicated that they were upset with Sinema for her refusal to agree on the terms of the Biden regime’s “Build Back Better Bill,” a radical $3.5 trillion billion dollar spending bill that will drastically raise the taxes of small business owners, among other things. Senator Sinema has slammed Democrats for their refusal to hold a vote on the bill, claiming that the Democrats have broken too many promises and that it is betraying the trust of the American people.