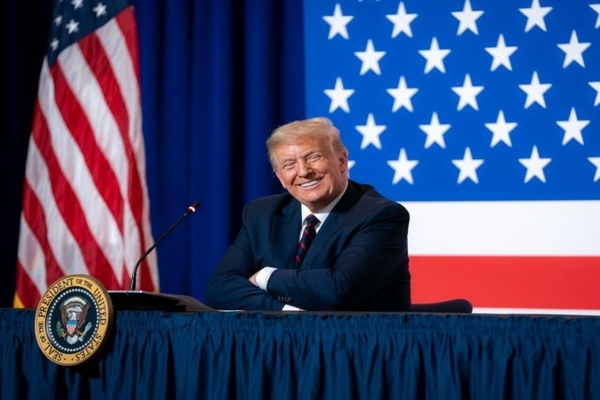 (dailyconservative)- President Donald Trump issued a challenge to Democrat presidential nominee Joe Biden on Sunday, calling on Biden to condemn Antifa for the violence it is fomenting in riots in cities across America.

“When is Slow Joe Biden going to criticize the Anarchists, Thugs & Agitators in ANTIFA?” Trump wrote on Twitter.

While Biden criticized the violence generally, he did not condemn Antifa specifically. Some think that’s because Antifa is linked to the radical left wing of the Democrat party.

Trump also wondered when Biden would encourage Democrat mayors to bring in the National Guard to get control over the violence.

“When is Slow Joe Biden going to criticize the Anarchists, Thugs & Agitators in ANTIFA?” Trump wrote on Twitter.

Trump commented after the Biden campaign announced that the former vice president would emerge from his basement and travel to Pittsburgh to condemn violence.

“I condemn violence of every kind by anyone, whether on the left or the right,” Biden said in a campaign statement. “And I challenge Donald Trump to do the same.”

Biden’s decision to break his silence on the leftist rioting occurred after a 17-year-old boy from Illinois was charged with the shooting deaths of two protest agitators in Kenosha, Wisconsin, last week and a man wearing a “Patriot Prayer” hat was shot and killed as protesters clashed in Portland on Saturday night.

Trump questioned why Biden had not urged Democrat mayors to bring in the National Guard to help restore law and order to their cities.

“When is he going to suggest bringing up the National Guard in BADLY RUN & Crime Infested Democrat Cities and States?” he asked.

Trump also mocked Biden for his delayed reaction, which he claimed was the result of political polling.

“Rushing him out of basement after seeing some very disturbing numbers,” Trump wrote. “Don’t worry, he’ll go back to basement soon!”

The president suggested that Biden was afraid to be more aggressive against leftist violence because he needed their votes in November.

The president plans to visit Kenosha, Wisconsin, on Tuesday: