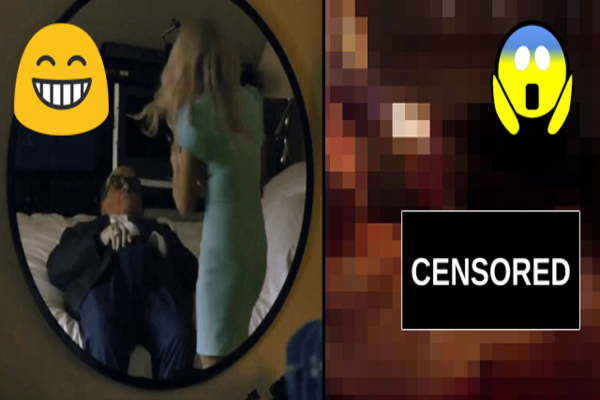 Big Tech together with the media pushed “compromising” video of Rudy Giuliani purportedly touching himself sexually to the top of their pages only to turn around days later and censor and ban everyone sharing newly-leaked compromising videos and pictures of Joe Biden’s son Hunter reportedly smoking crack while having sex with an unknown woman.

The Gateway Pundit reported Saturday they were suspended from Twitter just for reporting on and linking to one leaked video of Biden’s crack-smoking sexcapades.

Actor James Woods was locked out of his account for sharing a censored meme mocking the Vice President’s son and pointing out how he’s a huge national security threat:

Woods was only allowed back after he was forced to delete the tweet.

The compromising videos and pictures were leaked online (with pixelation) by the Chinese site GTV. I’m not going to link to it and have no intention of linking to it but you can find the videos and photographs all over 4chan’s pol forum.

According to the leaker, there’s “more and more videos coming” and “more than 10,000 pictures coming.”

As Woods and others noted, this is a national security issue.

If Donald Trump Jr. was out banging hookers, smoking crack and making sex tapes which fell into the hands of our foreign adversaries and could potentially be used to blackmail him that would be a top story.

Instead of the story being suppressed and video of his crack-smoking escapades censored, it would be put straight to the top of Twitter’s fake “Trending” page and shared all over Facebook, YouTube — not to mention national TV!

If Don Jr was seen smoking crack while banging an unknown woman the video would be on every major television station 24/7 until the day of the election.

Imagine too if Don Jr’s ex accused him of Facetiming with their 14-year-old relative while he was naked and smoking crack, as we’ve reportedly seen in the leaked texts between Joe and Hunter Biden.

The media coverage would be wall-to-wall! They’d say (rightly) that it was a national security issue and pundits would blame Trump’s distant parenting and so on and so forth. They already attack the hell out of Trump’s kids even though they’re decent people who haven’t done anything like what Hunter has!

Our media has made clear they have zero interest in following any of Hunter Biden’s shady dealings up and they’re not going to cover this scandal either.