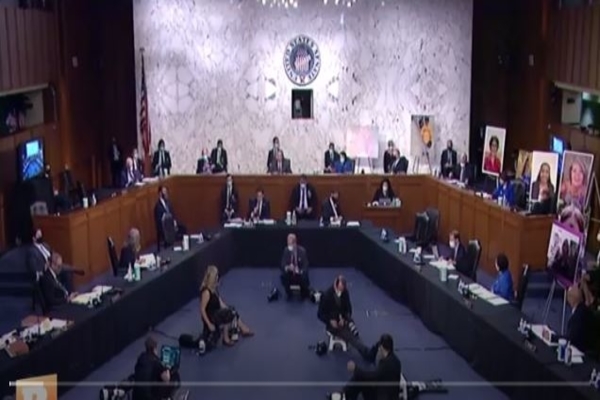 During opening statements at Barrett’s first day before the Senate Judiciary Committee, Hawley said Senate Democrats have sought to bring back a “religious test for office,” especially as it pertains to Catholics such as Barrett.

One attack after another in the liberal media. One hit piece after another. Many of them echoed by members of this committee … questioning whether, I guess, if you have the independence to be a judge, a justice on the United States Supreme Court. And it’s not just in the newspapers; it’s members on this committee, including the Democratic nominee for Vice President of the United States, who has questioned past nominees about their membership in Catholic fraternal organizations like the Knights of Columbus. And for those watching at home, Sen. Harris and other members of this committee have repeatedly questioned judicial nominees’ fitness for office because of their membership in the Knights of Columbus.

The ranking member, when you were last before this committee judge … the ranking member referred to your Catholic convictions as “dogma”–that’s a quote–that “lives loudly within you.” Picking up the very terminology of anti-Catholic bigotry current in this country a century ago, she wasn’t alone. Other senators on this committee last time asked you if you were an “Orthodox Catholic.” One senator said she worried that you would be a “Catholic judge” if you were confirmed because of your religious beliefs, I guess, as opposed to an American judge, as if you can’t be both–a devout Catholic and a loyal American citizen. And it’s not just you, judge. Other nominees that have come before this committee have been asked by my Democrat colleagues over and over their views on sin, their views on the afterlife, their views about their membership statements of Catholic organizations, about their membership in other Christian organizations, and on and on and on. And let’s be clear about what this is. This is an attempt to … bring back an old standard that the Constitution of the United States explicitly forbids. I’m talking about a religious test for office.

Hawley said the anti-Catholic bigotry that has permeated the Senate Judiciary Committee in confirmation hearings must end, calling for Senate Democrats to denounce the attacks on Barrett’s Catholic faith.

She and her husband have chosen to raise their family according to their Catholic beliefs in accordance with their faithful fellowship with other Catholics. Heck, 65 million Americans are Catholics, and many, many millions more are Christians of other persuasions. Are they to be that they cannot serve in public office, that they are not welcome in the public sphere unless the members on this committee sign off on their religious beliefs? I, for one, do not want to live in such an America. And the Constitution of the United States flatly prohibits it.

I would just say to my Democrat colleagues, these years now … this pattern and practice of religious bigotry–because that’s what it is when you tell somebody that they’re too Catholic to be on the bench, when you tell them they’ll be a Catholic judge, not an American judge, that’s bigotry–the pattern and practice of bigotry from members of this committee must stop. And I would expect that it be denounced.

Barrett is a mother of seven children, a judge on the U.S. 7th Circuit Court of Appeals, a professor at Notre Dame Law School, as well as a graduate of Notre Dame. During her confirmation hearing in 2017 to the 7th Circut Court of Appeals, Senate Democrats went after Barrett’s Catholic faith.

In one exchange, Sen. Dianne Feinstein (D-CA) questioned if Barrett’s Catholic faith disqualified her from serving on the 7th Circuit Court of Appeals.

“The dogma lives loudly within you,” Feinstein told Barrett. “And that’s of concern when you come to big issues that large numbers of people have fought for for years in this country.”

In another exchange, Sen. Dick Durbin (D-IL) questioned whether Barrett was an “Orthodox Catholic” or not, to which Barrett said, “I am a Catholic.”