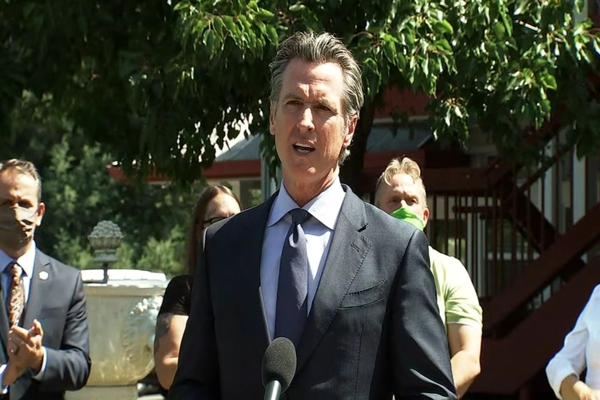 (breitbart) – A new Emerson College poll shows a statistical tie between likely voters who favor removing Gov. Gavin Newsom (46%) in the Sep. 14 recall, and those who favor retaining him (48%). The poll, conducted July 30-August 1, has a margin of error of 3%.

Moreover, undecided voters appear to be breaking against the incumbent. In July, 43% favored recalling Newsom, with 48% against it, and 6% of likely voters undecided. Undecided voters have since fallen 3%.

In a press release, the polling company said:

A plurality of voters (40%) are unsure which candidate they will choose for the second ballot question, who should replace Gov. Newsom in the case of his recall. Leading the field of candidates is talk radio host Larry Elder, at 23%. Since July’s poll, Elder has gained seven percentage points. Businessman John Cox and former Olympian and television personality Caitlyn Jenner are both polling at 7%, followed by California State Assemblyman Kevin Kiley at 5%, former San Diego mayor Kevin Faulconer at 4%, and social media influencer Kevin Paffrath at 1%. Thirteen percent (13%) of respondents reported that they plan to vote for someone else.

A plurality (44%) of Republicans and nearly a third (29%) of Independents are planning to vote for Elder. A majority of Trump voters from 2020 (55%) are supporting Elder, while 70% of Biden 2020 voters are either undecided or voting for someone else.

Early voting will begin in mid-August, when the first mail-in ballots will be sent to voters. California is still operating under voting rules from the pandemic, and will send ballots to all registered voters, not just those who request them.

Joel B. Pollak is Senior Editor-at-Large at Breitbart News and the host of Breitbart News Sunday on Sirius XM Patriot on Sunday evenings from 7 p.m. to 10 p.m. ET (4 p.m. to 7 p.m. PT). He is the author of the recent e-book, Neither Free nor Fair: The 2020 U.S. Presidential Election. His recent book, RED NOVEMBER, tells the story of the 2020 Democratic presidential primary from a conservative perspective. He is a winner of the 2018 Robert Novak Journalism Alumni Fellowship. Follow him on Twitter at @joelpollak.