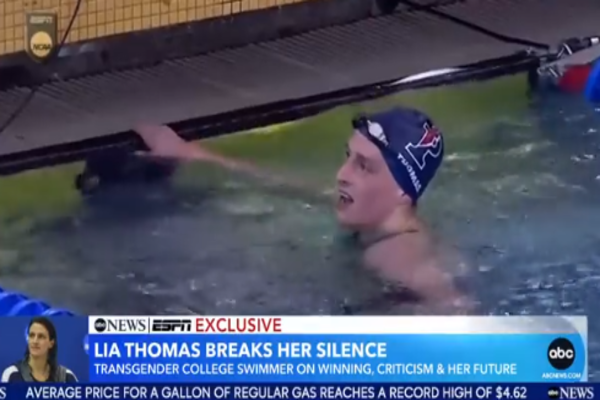 According to an interview the University of Pennsylvania swimmer anonymously gave to the Washington Examiner, Thomas spent the 2021/22 swimming season refusing to come to terms with the damage he was doing to his “real” female opponents and teammates.

The Examiner interview came on the tail of the appearance that Thomas made on Good Morning America last month, in which the controversial swimmer said he didn’t need “anybody’s permission” to participate as a woman in college swimming.

While the media celebrated Thomas for the GMA interview, the Examiner discovered that others did not consider the interview flattering.

“You can tell he is mentally ill,” the natural-born female UPenn swimmer told the Examiner. “I saw the [GMA interview] and was so disgusted.”

The former Thomas teammate added that Thomas is not living in reality and has flatly refused to accept that he has upset many of his teammates.

“Lia identified as a woman, but she is not a female,” the woman added. “That is a fact. It doesn’t matter how you feel.”

The swimmer blasted Thomas for putting his happiness ahead of everyone else’s.

“And to say, ‘Oh, well, I am happy,’ it is just so narcissistic. And to not even acknowledge how other girls might feel, it’s selfish and disgusting,” she exclaimed.

“It proves that Lia only cared about prioritizing Lia’s happiness above everybody else’s. It’s absurd,” the UPenn swimmer said. “You don’t have an argument as to why this should be OK.”

Thomas is reportedly setting his sights on trying out for the U.S. Olympic Swim Team, but after graduating from the University of Pennsylvania, his college swimming career is thankfully over.