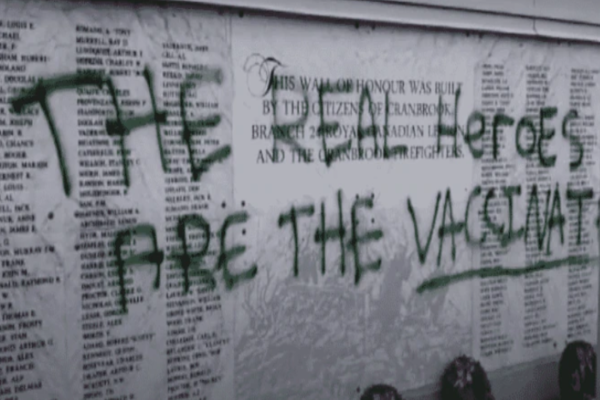 (bigleaguepolitics) – The Anglosphere, at least in terms of their willingness to defend traditional Western values, has become the sick men of the West in the eyes of many. From the inability of even supposedly conservative governments in Britain and Australia to prevent the encroachment of medical tyranny to the nearly-countless BLM riots in America, it seemed only a matter of time before proudly post-national Canada would come out with their latest round of cultural brain farts, and it would appear that they (sadly) did not disappoint.

According to Summit News, a war memorial in Canada dedicated to fallen soldiers was defaced with graffiti with the words “the real heroes are the vaccinated” because apparently elderly veterans that are healthily skeptical of a hastily-approved jab and their fallen peers who would have joined in their doubts cannot hold a candle against those who submitted to the medical regime by surrendering their medical autonomy, especially those who received treats for doing so.

Multiple news sources have confirmed with visual evidence that this story is indeed not a creation of Babylon Bee.

The graffiti message was mindlessly created at the Cranbrook Cenotaph in Cranbrook, British Columbia right before the municipality was to celebrate and honor their veterans on Remembrance Day on Thursday.

Fortunately, law enforcement was notified of the vandalism early Thursday morning at around 7am, giving them enough time to rectify the defacement in time for the festivities later that day.

“As a community, we are beyond disappointed by the disrespectful actions of those responsible for defacing such an important monument on such an important day for all Canadians,” the City of Cranbrook posted on Facebook.

“Police said they are actively investigating and will be collecting security video from nearby buildings in the hopes they recorded the vandal,” reports Global News.