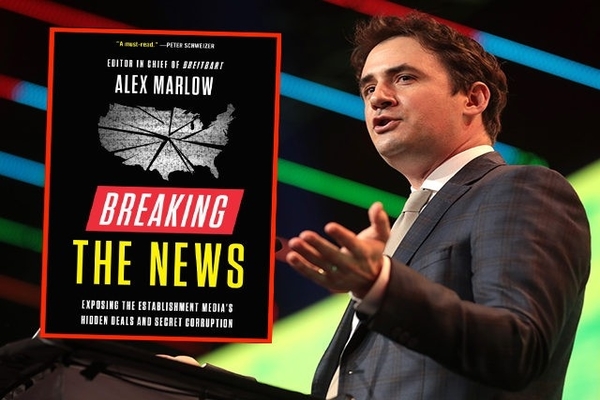 “I’ve got a collection of books that I would just encourage you to read, and they’re on a wide variety of topics,” Katz said before introducing Marlow to discuss Breaking the News. “Some of them are are like Marlow’s book, which is really blowing the lid off of the phonies, the hypocrites, the hacks that we find in the legacy media.”

He remarked, “There are moments that you come across a book and you just think to yourself, “I don’t want it to end,’ and then you want to tell everybody about it. That’s how I have felt about my friend Peter Schweizer’s books over the years. So when Schweizer says, ‘Katz, you’ve got to read Alex Marlow’s book, Breaking the News,’ I wasted not a second. I’m reading it, but I’m telling you. I don’t want it to end. It’s ugly what he exposes, but man is it enlightening.”

Marlow said, “I do think people will enjoy the book. You’ll want to throw the book a number of times when reading it, but I do think you’ll like reading it.”

Katz quipped, “I try and remain calm and cool. I’m reading it. I’m cursing. I’m yelling, and my wife says to me, ‘What’s the matter with you? I said, ‘I love this book,’ and she says, ‘You have a very strange way showing it.’”

Marlow emphasized his book‘s provision of original reporting and exposés on conflicts of interest across the news media industry driven by both multinational conglomerate ownership, as well as revelations of personal and familial relationships between news media figures and political figures.

“This book is not just about the media’s bias,” he stated. “We all know they’re biased. We all know they’re liberal. It’s about what’s changed during the Trump years, and when Trump came down that escalator, it was just game on, and their focus became less about … pushing a liberal agenda, and it became weaponized against President Trump and his supporters, and really trying to attack them and destroy them.”

“We have to talk to our family members and co-workers and friends at this point, because we’re losing too much of the country,” Marlow maintained. “We have to be more vocal, but one thing that was also stunning in the book is, the deeper I investigated, the more I realized a lot of the bias isn’t just towards left-wing politics. It’s also towards this globalist corporate mentality.”

He recalled, “I went to Berkeley, and I graduated in 2008, and I remember when the corporations were the worst thing in the world — Exxon and Halliburton were swear words — now we all identify with corporations — Apple, Facebook, Amazon … Tesla — and it’s so un-American to me, because all of these businesses have huge geopolitical strategic initiatives to try to co-opt other countries, including our adversaries like China.”
Katz asked Marlow about the influence of Andrew Breitbart.

“Alex’s CV is amazing,” Katz stated, “and the idea that you were Andrew Breitbart’s first employee and really studied studied at his knee, he was able to expose you to ideas and thoughts and help you to think and see things that have been hidden, almost like magic shows over the years..”

“It was such a blessing, and Andrew really is a giant, and I get to talk about him a little bit in the book,” he shared. “It’s such a treat to be able to do that, because we all revere Andrew, and everyone feels like they knew Andrew, and he’s in a terrific book, too, called Righteous Indignation that people should read, but the thing for me that was special is that I [was] really there from the beginning while I watched him toil and build his empire from nothing to something that was a total stalwart.”

Marlow continued, “I saw all of the tools that [Andrew Breitbart] used, and there are two big tools to take away for your audience. One is Andrew was incredibly funny, he used jocularity, and the other thing is he was a fearless warrior. He used righteous indignation, and he used them sometimes at the same time, sometimes like a toggle-switch — on and off — but that was all he had.”

“[Andrew Breitbart] never tried to lie,” he added. “He never was coercive. He never tried to compromise people who didn’t want to compromise. He fought battles and then he tried to bring you over with his humor. It was truly brilliant, and in retrospect, we could all learn so much from him.”

He concluded, “[Andrew Breitbart’s] legacy lives on in virtually all of conservative media, right now. I think most of us understand those tools, and it is great to give him more of a due, because everyone does seem to respect Andrew at this point, but still, I think his legend should grow, and I’m thrilled to evangelize on behalf of him.”