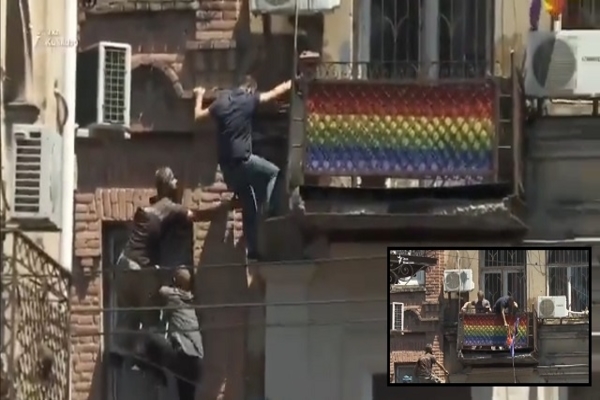 (IL) – Georgian protesters on Monday forced the cancellation of an LGBT pride march after storming the office of an LGBT lobby group, tearing down their pride flags and replacing them with Georgia’s national flag.

From Reuters, “LGBT+ campaigners in Georgia call off pride match after office attack”:

LGBT+ campaigners in Georgia called off plans to stage a pride march on Monday after violent groups opposed to the event stormed and ransacked their office in the capital Tbilisi and targeted activists and journalists.

Activists launched five days of LGBT+ Pride celebrations last Thursday and had planned a “March for Dignity” on Monday in central Tbilisi, shrugging off criticism from the church and conservatives who said the event had no place in Georgia.

[…] Video footage posted by LGBT+ activists showed their opponents scaling their building to reach their balcony where they tore down rainbow flags and were seen entering the office of Tbilisi Pride.

[…] Campaigners said some of their equipment had been broken in the attack and that they had been forced to cancel.

Will Biden conduct drone strikes on them in order to spread “our values?”