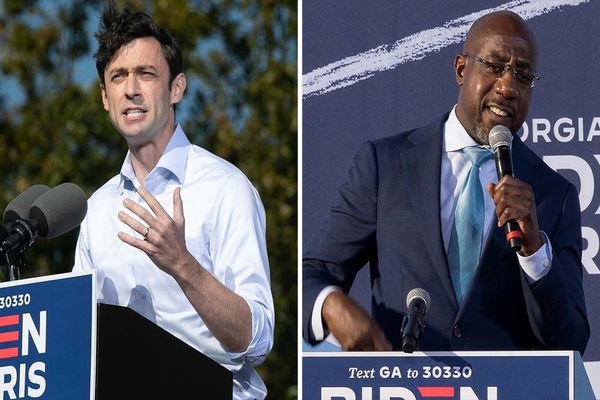 This week’s survey showed Ossoff increasing his lead over Sen. David Perdue from an identical survey taken three weeks ago, jumping from a two-point lead to a five-point lead, or 51 percent to 46 percent.

Warnock, on the other hand, leads Sen. Kelly Loeffler by seven percentage points, with the results remaining the same as they did in the same poll released three weeks ago.

The survey, taken December 16-20 among 600 likely runoff voters, has a margin of error of +/- 5.1 percent, bringing Ossoff’s lead within the margin.

The survey coincides with an RMG Research survey, which pointed to tight races in Georgia, with the GOP incumbents and their Democrat challengers statistically tied:

Vice President-elect Kamala Harris traveled to the Peach State on Monday to stump for the Democrat challengers as the direction of the U.S. Senate hangs in the balance, hinging on the outcome of the runoff. Duel victories for Democrats would result in a split Senate, giving the power to the party in control of the Oval Office.

“You know 2020’s been a difficult year. 2020’s been rough. You know people keep making jokes about 2020, like we want this thing to be over. But you know what? As far as I’m concerned Georgia, Columbus, 2020 ain’t over until January 5th,” Harris told the crowd on Monday, adding that “everything is at stake” and expressing confidence that Democrats will show up to the polls and deliver another victory to the Democrats on January 5: