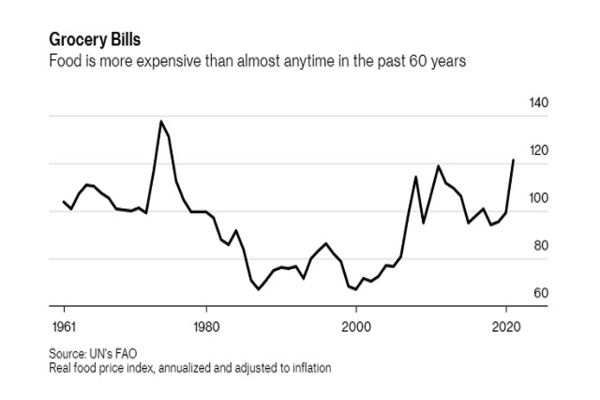 (informationliberation) – We’re only just beginning to feel the effects of the global lockdown and the ensuing money-printathon.

From Bloomberg, “Priciest Food Since 1970s Is a Big Challenge for Governments”:

Whether for bread, rice or tortillas, governments across the world know that rising food costs can come with a political price. The dilemma is whether they can do enough to prevent having to pay it.

Global food prices were up 33% in August from a year earlier with vegetable oil, grains and meat on the rise, data from the United Nations Food and Agriculture Organization show. And it’s not likely to get better as extreme weather, soaring freight and fertilizer costs, shipping bottlenecks and labor shortages compound the problem. Dwindling foreign currency reserves are also hampering the ability of some nations to import food.

[…] Food inflation spurred more than two dozen riots across Asia, the Middle East and Africa, contributing to the Arab Spring uprisings 10 years ago. Pockets of discontentment are growing again. Unrest in South Africa triggered by the arrest of former President Jacob Zuma in July turned to food as people looted grocery stores and restaurants. Shortages in Cuba led to the biggest protests in decades.

Adjusted for inflation and annualized, costs are already higher now than for almost anytime in the past six decades, according FAO data. Indeed, it’s now harder to afford food than it was during the 2011 protests in the Middle East that led to the overthrow of leaders in Tunisia, Libya and Egypt, said Alastair Smith, senior teaching fellow in global sustainable development at Warwick University in the U.K.

“Food is more expensive today than it has been for the vast majority of modern recorded history,” he said.

It’s probably a good idea to start a garden.