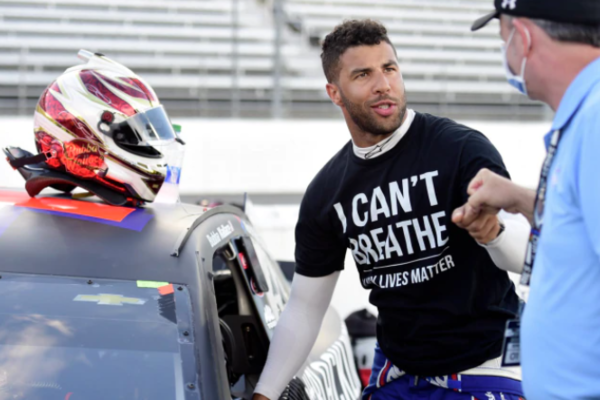 (bigleaguepolitics) – Racing league NASCAR has attacked the “Let’s Go Brandon” chant, castigating the sport’s conservative fans in favor of a political alliance with the corporate media and the Left.

Steve Phelps, the president of the corporation, said that NASCAR does not want to he associated with the saying, which originated from an interview following a race. An NBC personality misheard NASCAR fans chanting “F*** Joe Biden,” instead translating the words from the crowd as “Let’s Go Brandon,” believing the fans to be referencing driver Brandon Brown.

“It’s an unfortunate situation and I feel for Brandon, I feel for [NBC News personality] Kelli,” Phelps said. “I think unfortunately it speaks to the state of where we are as a country. We do not want to associate ourselves with politics, the left or the right.”

“Do we like the fact that it kind of started with NASCAR and then is gaining ground out elsewhere? No, we’re not happy about that,” said Phelps. Liberal media personalities have increasingly freaked out over the popularity of the slogan, flabbergasted that members of the public would dare to criticize the presidential throne.

Phelps threatened lawsuits against NASCAR fans who use what they claim is copyrighted league imagery in Let’s Go Brandon merchandise. Some have sold t-shirts and material with racing stripes resembling NASCAR’s logo, although it’s unclear if a copyright claim from the league would have any merit.

NASCAR’s fans trend overwhelmingly conservative, but the “sport’s” leadership are affiliated with the media-corporate elite of the Democratic Party. A driver of the league was caught pushing a hate hoax last year, falsely claiming that a simple garage door pull in his car stall was a noose intended as a symbol of racial hatred.