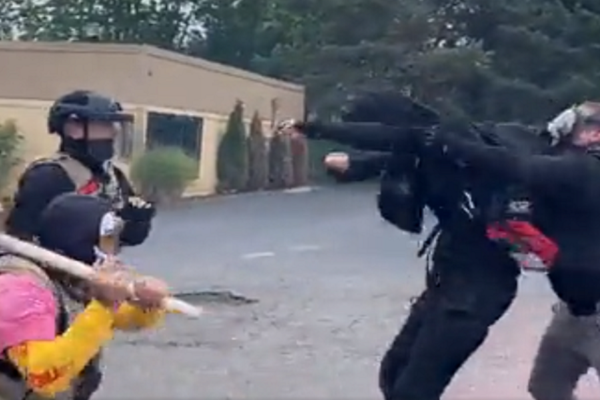 (breitbart) – Chaos broke out on the streets of Portland on Sunday afternoon as Antifa and Proud Boys clashed in open combat. Video tweeted by multiple journalists shows the violence breaking out between the two groups while Portland Police carried out their promise to not interfere or intervene.

A conflict broke out in northeast Portland between Antifa members armed with improvised explosives and Proud Boys armed with paintball guns and other weapons. Video shows the escalation of violence as the two sides went to battle.

Proud Boys claimed a white van driven by Antifa attempted to drive into their group assembled in an abandoned K-Mart parking lot. After driving the Antifa crowd away, the Proud Boys group trashed the van and overturned it.

Both sides engaged in violence as Antifa threw improvised explosives at the Proud Boys. The Proud Boys returned fire with paintball guns and appeared to assault Antifa counter-protesters.

Another vehicle, allegedly driven by Antifa, appeared to drive into the crowd of Proud Boys who responded by vandalizing the van.

Antifa continues to retreat as the Proud Boys advance on their position. Both sides continue the violent actions against the other while police are nowhere to be seen.

Proud boys find an Antifa member in his parked vehicle and pull him out of the truck before vandalizing it.

Lana Shadwick is a writer and legal analyst for Breitbart News. She is a trial lawyer who previously served as a prosecutor and family court associate judge in Texas.